Let The Right One In: Horror as a Strange Kind of Poetry… 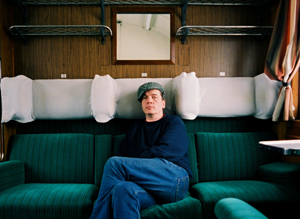 Director Tomas Alfredson’s work, as well as cinematographer Hoyte van Hoytema’s, raises this film above and beyond its genre trappings by crafting a formidable drama concerning vulnerability and manipulation, innocence and experience.

Why did Alfredson set the film in 1982? Alfredson’s answer is at first a little disconcerting.

“It’s autobiographical,” he says and with a grin, adding, “except for the vampire stuff.”

The story unfolds in Sweden, circa 1982, in a Stockholm suburb. Everything is snow, ice and frozen breath.

Oskar (Kåre Hedebrant) is 12-years-old. He is bullied relentlessly and has violent revenge fantasies.

New neighbors move in, an older gentleman and a girl, Eli (Lina Leandersson), that appears to be Oskar’s age, though appearances are deceiving. The filmmakers waste no time revealing their bloody business.

Instead of turning to classic films or books, Alfredson sought inspiration elsewhere.

“I studied Renaissance painters,” he says, specifically “when it comes to lighting and colors.”

He cited, among others, Hans Holbein as a key to his film’s visual motif.

What about the “cold” look of the cinematography?

“It is very hard to capture cold on film,” Alfredson admits.

So they went north where cold was in abundance.

“We filmed in temperatures of 30 Celsius (-22 Fahrenheit),” he says, “cameras were stopping … I got frostbite in two fingers.”

Alfredson has no regrets concerning the extreme temperatures during the shoot.

“It’s a strange kind of poetry,” he says, “the light is like knives.”

Response to the film has been resoundingly positive, and it’s proving to be a success, so naturally there will be a sequel, right?

“I’m not a sequel kind of guy,” Alfredson reassures.

Let the Right One In releases in select theaters Oct. 24.