I've Loved You So Long: Kristin Scott Thomas is reborn. 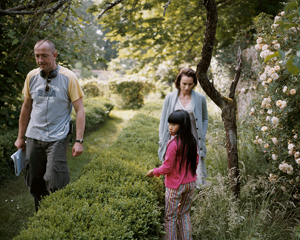 Does time really heal all wounds? Does true love stand the test of time? These are just a couple of the many poignant, unspoken questions that drive the emotional journey of I’ve Loved You So Long.

Juliette (Kristin Scott Thomas) has been in prison for 15 years. Upon her release, she discovers that everything is new to her again.

She must re-learn life and re-capture emotions that have long been dead to her. Even with her own sister reaching out to her, Juliette is unsure of how to get her footing to take the proper steps on the road ahead.

Juliette is a broken, lonely woman who is obviously scarred from something very traumatic in her past. She carries the weight of that past in the secrets she keeps. The toll it has taken on her is obvious.

Scott Thomas, an Academy Award nominated actress that’s about to premiere on Broadway in “The Seagull,” brilliantly portrays Juliette. Her performance in this film is being widely heralded as one of the most outstanding of her career.

“This role, when I read it, I thought, ‘I have to do this. It’s fabulous!’” Scott Thomas recalls. “I thought, this is great because of the subjects that this character deals with; isolation, rejection, abandonment, fear, guilt, agony, interior pain. This film deals with subjects you don’t even want to think about that are taboo and you push to the back of your head.”

You would never guess this is a freshman filmmaking effort for renowned, French novelist Philippe Claudel. This powerful drama fully utilizes all of the cinematic tools available to a masterful end.

In explaining why he suddenly decided to explore the media of film to convey one of his stories, he says, “In many ways this is a story of silence. I wanted to convey many things in the silence between the characters, to use the sound, to use the music, the clothes and the actresses. In a book, language is the only instrument. On film there are many instruments.”

Scott Thomas clarifies how silent scenes could convey such emotion, saying, “Little by little we started to realize that there was just too much. There were too many words in the film and that we could pare it all down and start just being with the woman, being with Juliette and by just watching her for a bit, you understand more than if she were talking to somebody [and] explaining it.”

Scott Thomas discusses the seemingly universal appeal of the film.

“What’s extraordinary at the moment is the reaction that we’re getting across the board in Europe,” she explains. “I think that people really want to be able to have a space to feel things that are magnified on a movie screen. I think people really love that, to be really moved.”

I’ve Loved You So Long releases in select theaters Oct. 24.