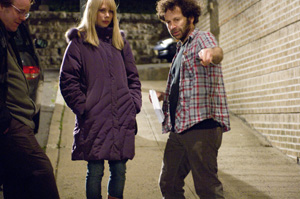 Charlie Kaufman is not Caden Cotard, the passionate theater director found in Kaufman’s latest script/directorial debut feature Synecdoche, New York. Nor is he Charlie Kaufman, the semi-balding, ball of sweat writer who struggles to adapt The Orchid Thief in the filmAdaptation. Being Charlie Kaufman means not being any of the characters he writes.

“I don’t consider myself either of those people,” he says. “I use elements of my personality and interests to form characters, but they aren’t me.”

Completely ambitious but 100 percent truthful, Kaufman’s scripts have defined him as one of the premier writers in cinema. While Synecdoche, New York marks Kaufman’s first foray into the director’s chair, it also offers his audience his most poignant script to date.

Death, women and the constant pursuit for artistic integrity enrapts Caden Cotard, played by Philip Seymour Hoffman. Unfulfilled as a theater director, Cotard’s life is put on the brink as a strange condition has begun to methodically shut down each of his autonomic functions.

To make matters worse his equally artistic wife Adele (Catherine Keener) has decided to leave Cotard, taking their daughter, Olive, with her to Berlin, so that she (Adele) can pursue her career in art. Down but not out, Cotard’s career is given a shot in the right direction as he receives a prestigious MacArthur Grant, which allows him to mount a massive project in an equally massive warehouse, where he directs the performers to act out their lives in a growing replica of New York City.

What follows is a classic Kaufman tale that plunges Cotard in and out of reality where his own life and the many relationships associated with it become intertwined with the supposed masterpiece of a play that he is constantly constructing.

ynecdoche, New York, with its massive size and scope, could very well crumble in the hands of any experienced director. It’s a testament to first-time director Kaufman (who studied at NYU film school) and his directing ability to successfully manage all that epic celluloid, fully keeping his audience aware but always being one step ahead.

“I felt that I understood this better than any other director off the street. Spike [Jonze; producer of Synecdoche, New York and director of Being John Malkovich] was not going to do it. I couldn’t think of anyone else that I’d want to do it, or I’d trust with it. So I decided to try to do it,” says Kaufman.

Two hundred scenes, 45 days of shooting, heavy prosthetic make-up: all under incredible New York heat and a warehouse: the risks on Synecdoche, New York were prevalent. But taking risks is just one reason why Kaufman is a writer.

Risks are prevalent because of their inevitable reward. Still, with an Oscar [for Eternal Sunshine of the Spotless Mind] to"mind his name and a loyal audience, Kaufman feels that he’s still constantly learning as a writer, always surprised with every new creative conception.

“I set out to put myself in that position every time I write. I try to put myself in a position of not knowing how to do what it is that I’m setting out to do. I don’t see any reason to do it otherwise,” he says.

Why change, when being Charlie Kaufman has worked so exceptionally well?