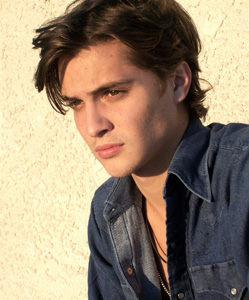 “The first time I saw myself in a movie, I almost passed out,” confides Luke Grimes, the star of two consecutive Sundance favorites, All the Boys Love Mandy Lane (scheduled to open in 2009) and the dark comedy Assassination of a High School/ President (slated for a 2009 first quarter release), co-starring Bruce Willis and Mischa Barton.

“It was really exciting, but it’s like a roller coaster, and I’d never seen myself on camera before, except home videos at Christmas, and it was a huge theater,” he says, still sounding a bit overwhelmed. “Not just seeing yourself on a huge screen but when you hear your own voice when it’s coming out of a theater sound system, it’s really bizarre.”

Grimes will have to get used to that rollercoaster sensation if he continues his present course.

The 24-year-old actor moved to Los Angeles three and a half years ago after graduating from New York’s American Academy of Dramatic Arts and, after a brief stint at an art house theater in Santa Monica (“Oh man, it was hell. I just put butter on popcorn all day.”),Grimes booked his first job on the high school slasher film, All the Boys Love Mandy Lane directed by Jonathan Levine (The Wackness).

Grimes says the experience was “such a good time, it was like summer camp. It didn’t feel like we were making a movie until I saw it. It was the most fun month of my life.”

Next came roles opposite veteran actor Brian Dennehy (“He’s an old longshoreman. He doesn’t talk, he barks.”) in War Eagle, Arkansas and Bruce Willis in Assassination.

Working with Willis was “really cool but it was cooler for everyone else in my life, I think. To my family and friends, it was like I was a ‘real’ actor. It was nice to see how excited everyone else got.”

At 1 a.m. on a Saturday we would find you: On my roof with my band.

If you had to be on a reality show: I’d gain a bunch of weight and be on “The Biggest Loser.”

When was the last time you cried: My girlfriend is making me watch “Sex and the City” because and, I’m not gonna lie, I cried because of “Sex and the City” [the episode of Miranda’s baby shower] when Charlotte gets upset. I didn’t bawl-cry but I teared up. But don’t make it seem like I love “SATC,” help a brother out here.

What word describes what you hope the next five years has in store for you: Change.

If two actors got together and had a love child that was Luke Grimes, who would they be: I’d like it to be Montgomery Clift and Meryl Streep. That’s what I’m aiming for.