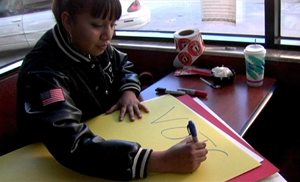 In just a few weeks, the most important election of our time will take place, and if you just can’t wait for all the excitement Nov. 4 – or wish you could spend the day being 11 places at once – then stop by USC for this week’s screening of Election Day. Sponsored by the school’s arts and humanities initiative and organized by the School of Cinematic Arts, the Vote Film 2008 series has spent the last month hosting free on campus screenings of movies like Recount and Shampoo in an effort to explore the intersections of politics and media.

And with our judgment day fast approaching, tomorrow’s showing of Election Day will be a much-needed retrospective of the people and processes involved with making your vote count. On Election Day 2004, 14 film crews trailed 11 seemingly ordinary Americans around the country and simultaneously filmed their voting experiences. From Native American activists making signs in a breakfast diner to African-American teenagers offering free rides to polling places, director Katy Chevigny constructed a documentary film on a national scale out of a single day’s footage.

Focusing not on the candidates, but on the voting process itself, the 11 stories in Election Day give an honest – albeit sometimes unsettling – insight to how we choose the leader of the free world. Starting with 4:30 a.m. Chicago IHOP volunteer briefings and ending well after midnight with hand-counting votes in a Florida high school auditorium, 105 hours of incongruent footage from all over the country was somehow woven together into one cohesive piece that gives an inspiring tapestry of American democracy.

So get ready for the upcoming Election Day by watching the chaos that ensued with the last one. The screening is open to all and will be followed by a Q & A with Chevigny, herself. 7 p.m. FREE.