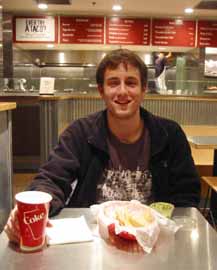 For some, the Chipotle Mexican Grill is merely a lunchtime hotspot. For others, it’s a passion that verges on the obsessive side.

“It was because the food was so good that I started to become curious as to what was in it. I knew it couldn’t be healthy for you if it tasted this great,” Silverman said. “Chipotle had sent me the nutritional information in a spreadsheet, but it was really hard to figure out exactly how much my burrito would have. So I decided to build an online calculator.”

Early in the summer, Silverman posted the nutritional calculator link on several Internet forums. When the link started to attract more than 500 visitors a day, Silverman decided to bolster his Web design skills by creating the fully interactive Web site. After purchasing the ChipotleFan.com domain name and completing the site in 10 hours, it was officially launched near the end of July. The site currently boasts an impressive 124,578 unique visitors since its debut, with February drawing an average of 850 daily users.

The Chipotle Mexican Grill is taking notice too. Joe Sapienza, general manager of several Chipotle restaurants in the Washington D.C., says that he was told to check out the site by upper management.

“The cool thing about (the Web site) and the reason why I was advised to look at it is basically to appreciate the traffic it’s generating for Chipotle in terms of raising awareness,” Sapienza said.

For those in search of a deeper connection, the “Burrito Soulmate” section allows you to pair up with the person who gets the same exact meal as you. According to the site, nearly 64 percent of Chipotle addicts have been linked up with their burrito love match. But don’t hold your breath while waiting for your mate; there are more than 68,000 possible meal combos.

“I thought that it might be cool to find out who gets the same exact burrito, since there are so many possible combinations. I started experimenting with the technical end of it and it took maybe two hours to figure it all out,” Silverman said. “No love stories yet, but it is a good way to get people to sign up so that I can send out to an e-mail list.”

Though Sapienza found the Burrito Soulmate link to be interesting, he warns that the nutrition calculator could be misleading.

“It’s a good idea but it’s impossible to calculate the nutrition levels of our food,” he said. “You can always say “just a little bit of rice” or “a little lighter on the sour cream” or whatnot. As simple as our menu is, it’s staggering how many thousands of combinations there are.”

The menu at Chipotle is simple indeed. The enormous burrito (or taco or bowl) can be stuffed with a choice of free-range chicken, free-range pork, spicy shredded beef, or grilled veggies. Cilantro-lime rice, beans and salsa are added to taste, along with several other fresh ingredients.

“The first time I tasted the food I was immediately hooked,” Silverman said. “A lot of it is the freshness. Each individual ingredient is of good quality, so you when you combine it all it makes a great meal.”

Silverman admits to visiting Chipotle at least once a week, saying that he starts to get “a little agitated” if he skips his weekly dose. Silverman and his friend once even wrapped themselves in foil in order to dress up as burritos and get free food from two separate Chipotle restaurants.

“It’s just addictive, or at least it feels like it is,” he said. “After I haven’t had it for a while I start to crave it. It really is good.”

When asked if he would take a job offer in an area that lacks a nearby Chipotle restaurant, Silverman hesitated.

“It would have to be a really good job. I wouldn’t change my life around Chipotle, but I would definitely start to miss it a lot,” he said. “I mean, when I chose to go to GW I didn’t check to see if Chipotle was there. It just happened to be a 10 minute walk from dorm.”

There is a pause.

“Well, actually I did look it up on the Internet to see if there was a nearby location a few weeks before I arrived.”