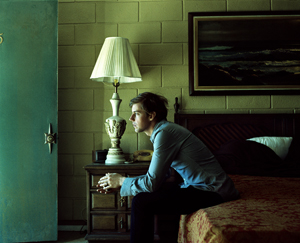 To say Jack’s Mannequin frontman Andrew McMahon has been through a lot in his life would, as the saying goes, be quite the understatement. The 26-year-old, multi-instrumental vocalist has been on top of the charts and been near death, having faced and overcome more challenges recently than many do in a lifetime, but then, McMahon’s a life marked by chaos and extremes.

In fact, he kind of thrives on both.

“I’ve been through enough at 26 that I feel like I’m 50,” McMahon says with a laugh, though anyone familiar with McMahon and his work is acutely familiar with the weight of the back story attached to his words. And no one is more familiar with the story than McMahon himself, which is why his band’s latest album, The Glass Passenger, is his most ambitious and challenging work yet.

“Because of the amount of shit that had happened since the last record, there was no question that whatever came out was going to be its own thing, and it had to be,” says McMahon.

While he may have taken his signature sweeping, piano-driven pop anthems to a whole new level on Passenger, McMahon is true to form in his honest approach to songwriting, something that proved challenging for him despite being his biggest strength.

“There were a lot of skeletons in me that I probably should have written about, but I couldn’t because I was either not well at the time or as soon as I got remotely well, we got on the road to promote the first album,” he says. “The hardest thing with this record was trying to go backwards to find those things and talk about them.”

While McMahon’s battle with leukemia surely provided a unique personal experience from which to pull lyrical inspiration, the subsequent change to his outlook on life would also alter the cathartic process for him in ways he hadn’t anticipated.

“Getting sick locked me into this position where it made me a lot more critical of myself and a lot more self-conscious,” he says. “It got to a point with this record where everything became so critical that sometimes it locked me up, and it’s hard to let that go, because it represents the unearthing of a lot of hard memories mixed in with a lot of present day struggle. Finding that moment to say the battle is over is hard when you’ve been fighting so long.”

Though he jokingly adds, “But we’re about there.”

Again, the significance of “about” isn’t lost on him.

Once McMahon managed to quell his inner critic, however, his next challenge would lie in taking a more objective ear to his music while deciding how much of his story to reveal.

“Certain things I didn’t want to come right out and say, so you find methods to throw a little dirt over the top of what you’re talking about, but then there are some things that are just heart-on-sleeve,” he says. “The first half of ‘Caves’ is metaphor but the second half is probably the most honest and brutal lyrics I’ve ever written, to the extent I didn’t want people to be able to connect to it. But good music isn’t about having shared the experience of somebody else, it’s about sharing the underlying current of what those experiences bring to a person emotionally.”

The outpouring of support McMahon has received from his fans, both in his personal life and for his music, can certainly attest to the validity of this.

“Hopefully when people listen to the songs, they find something that makes their day better or more livable. I feel like we’re always being told how bad everything is, I hope there’s something inside my music that provides some level of hope, but also an acceptance that things are the way they are,” he says. “That’s what I needed this record to be for me, that’s what I hope it is for somebody listening to it.”

The Glass Passenger is currently available. Jack’s Mannequin will perform Oct. 27 & 28 at the Troubadour. For more information, visit jacksmannequin.com.