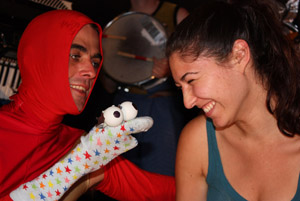 The most notable feature of “Earth Sucks” is the amount of fun it appears everyone is having on stage. The story of land weary teenager Echo Bell and her adventures with an alien rock band as they battle an evil pop rock diva seems like a big excuse for a party. Playwright Jonas Oppenheim, who in past productions has tackled serious political issues with disarming silliness, takes it to a new level.

The show is entertaining and thought-provoking. Emily Stern, daughter of radio host Howard, gets the humor and adds a pleasing touch with a lovely voice in the style of a young Debbie Harry.

Lucas Revolution as Fluhbluhbluh, leader of the alien rock band is hilarious. He plays his part with such earnestness it’s a pleasure to suspend disbelief or at least try. The fact that at any moment the performers may burst into song keeps you grinning.