HECUBA: Jon Beasley and Isabelle Albuquerque are a band – and a brand new genre. 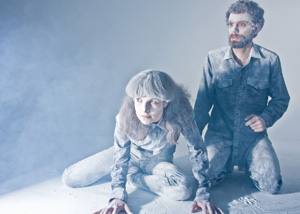 Hecuba is pretty well clipped in with our L.A. art/pop/space/macabre scene known to lurk around in black boxes and low-beat dub lounges that chip paint off the ceilings in the backstreets of downtown. They’ve toured with Devendra Banhart and friends, and are a delightful pair. Jon Beasley and Isabelle Albuquerque kick out theatrically crafted, ambient electro-dub – weaving, chugging, spacey, licking, scratching dance … compositions.

They’d much rather feather around talking about the music than give the kind of quick-lipped answer that we’re used to. When asked to classify their EP, Sir (Manimal Vinyl), they say it’s of the genre of “Aw-man-I-dunno,” and redirect you to their press site to hinge on what “they all” have to say.

“We find importance to leave it up to the listener … see it how you’d watch a film or story, interpret it that way,” says Albuquerque.

In fact, new interpretations of their music are well received by the band, who publish new mixes of their songs by other people on their site and their MySpace. Their Butchy Fuego “Virtual 7” No. 1” Sir re-mix is available as a free download at hecubahecuba.com.

Sir creeps and croons across hypnotic, dreamlike non sequitur. It can echo you along a trance-y lull or make you feel like you’re at an underground dance party with Tom and Jerry, Yoko Ono and a twitching videogame caught on “Berzerk,” maybe “Asteroids.”

These songs were birthed out of a cartoon, and equally characteristic, they are playful, fun, on the edge of dangerous and moving. What then courses out from the cat-and-mouse pair is a flossing through rhythms and sound bites with rapid precision.

This EP is a swathing of echoes through loud speakers and ends up something that the media feels the need to be qualified, quantified, categorized, customarily. Aw man, just go listen.

“We are really into theater … [the name Hecuba] was a joke, now it’s really more serious. It’s the tragicality, the theatricality of the character Hecuba … she got into the sensibility of what we were playing,” remarks Albuquerque.

The character Hecuba went insane after seeing the grisly dead corpses of her children Polydorus and Polyxena.

“Our music was inspired by L.A. We started out in New York, working on science fiction musical projects, theatrical stuff. The music turns itself out, we let the ideas go wherever they want to go,” says Beasley.

As entertainers who have a heavy history in theater and film, the intrigue seems to lie partly in the access one gets to audience perception in order to power each individual show.

“Every place is so different. We try to make our shows uniquely specific to the place,” says Albuquerque. “Our music takes on a lot of different characters.”

In 2007 Hecuba went with Banhart on his West Coast tour. When asked what that was like, Albuquerque starts laughing, “Oh! There was this one time at the Orpheum Theatre in L.A., Devendra got all these kids up on stage, they started dancing … it was wild. The stage almost fell down, the fire marshal got called … pretty beautiful.”

Devendra has dubbed Hecuba “the best band in L.A.”

“The next record is going to be so different from the EP. We hope as many different people as possible will be interested in our music,” Beasley says. “A full-length pop record. We are making songs that are incredibly musical, actually, inspired in part by Michael Jackson. We are excited to hear it start turning itself out.”

Sir is currently available. Hecuba will perform Oct. 31 at the Hammer Museum and Nov. 11 at the Smell. For more information, visit hecubahecuba.com.