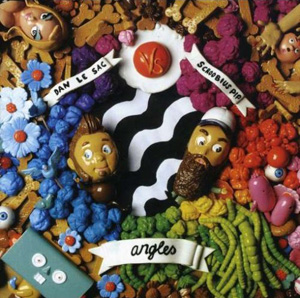 Dan Le Sac vs. Scroobius Pip’s debut album, Angles, can be labeled many ways. Spoken word, poetry, hip-hop and electronica are a few, as well as daring and lyrically forward.

Think new-age Robert Frost poem read out loud, with a thick British accent to a break-beat. That’s basically the London duo in a nutshell.

Their first single, “Letter from God to Man,” samples Radiohead’s “Planet Telex” in a non-blasphemous way. The track is set up as a first person narrative, where God is comically speaking to man about the current issues we’ve put upon ourselves; and it doesn’t stop there. “Thou Shalt Always Kill” plays as a handbook of don’ts with Scroobius Pip commanding “thou shalt not do” such things as buy Coca-Cola products or take Johnny Cash’s name in vain.

But strength relies on numbers, and out of the 13 tracks, only a few have enough oomph for repeated listens.