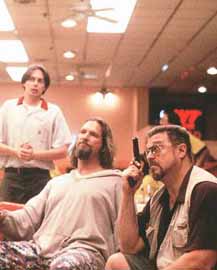 Started in the fall of 2002 by Will Russell and Scott Shuffitt, two avid fans of the 1998 Coen Brothers flick The Big Lebowski, Lebowski Fest West is a fun event designed to celebrate the film while raising money for the End Hunger Network.

The new, L.A.-based installment of the “traveling fan festival” will kick off Friday evening, March 25 at Hollywood’s Knitting Factory with appearances by some of the film’s lesser-known cast members: Lu Elrod, a university professor who played a waitress in Lebowski, will delight the audience with a comedy/ventriloquist shtick, and Peter Stormare, who plays the film’s Uli the Nihilist, will perform onstage with his band. There will be White Russians aplenty, and the party will be followed by a midnight screening of The Big Lebowski.

The festivities will continue on Saturday, March 26 at the 68-lane Cal Bowl with bowling and various contests (costume, trivia and others), along with appearances by even more of the film’s cast. Included among the scheduled attendees are David Huddleston, who played the Big Lebowski himself; Jerry Haleva, who has appeared in six films as Saddam Hussein; and Jim Hoosier, who appeared in the film as John Turturro’s bowling buddy, Liam. Jeff “The Dude” Dowd, on whom Jeff Bridges’ character in the film is primarily based, will also be in attendance both nights.

Tickets are available now through www.TicketWeb.com. The party at the Knitting Factory begins at 9 p.m. and is $15 per person. Tickets for March 26 at Cal Bowl in Lakewood, which goes from 8 p.m.-1 a.m., are $25 per person and include general admission, bowling (if available) and shoe rental. For more information, visit www.LebowskiFest.com .