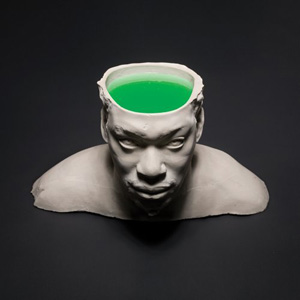 The newest from 36-year-old south Londoner Rodney Smith/Roots Manuva gets progressively more interesting and – musically – takes itself more seriously near its finish than its start. Early on, dancehall track “Do Nah Bodda Mi” has a lot of rhythmic step to it, a grower that’s a bit too simple and steady on first few listens, while “Kick Up Ya Foot” has got a good, heavy stomp of bass and “Buff Nuff” carries a syncopated beat thick enough to round out the record’s first half.

Slime & Reason grows a bit darker in its second half, though, with the haunting backing melody of “It’s Me Oh Lord” rounded out by the ghostly horns shot up throughout “2 Much 2 Soon,” on which Smith raps, “I’m wishin’ I was a trustafarian/I wouldn’t have to hustle/I wouldn’t have to swear/I came from this shit/I gotta do better.”

Of course, those words aren’t nearly as depressing as those on “C.R.U.F.F.” – “We’re too much hurt and too much conflict/seems to burn my bone these days/got a big ol’ yearn to stay home these days” – or as witty as those on my personal favorite here, “Well Alright,” the claim “I think like Jesus/God’s my dad/they wanna tie me to the cross and hurt my gonad/cause I do weird stuff with my pen and my pad.”