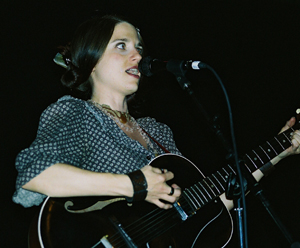 After a set by French pair Herman Dune – like a less-humorous, mysteriously Swedish-sounding Jonathan Richman and Tommy – a very tiny Jolie Holland came ’round to front a band with which she claims to have fallen in love.

To follow Holland from her 2003 debut, Catalpa, through the Oct. 7 release of The Living and the Dead makes her appear a touch disappointing in the latter day, if only because she’s adopted somewhat of a soft rock image that lacks the same authentic early American folk charm that kicked off her recording career. That in mind, it was also a touch disappointing to hear the transition from stage banter to song, the revealing of a sweetly sung Texas accent is in fact accentuated for the purpose of style.

Holland’s set was also unfortunately lacking in songs from the excellent Escondida, save for closing number “Old Fashioned Morphine,” though she pleased the crowd’s many ladies with “Crush in the Ghetto” and “The Littlest Birds.”

She thanked the Oregon bees for the honey that joined her on stage (and adorned her finger, from which she coyly sucked off a finger full), and each drink of water consumed garnered a “thank god.” She showed off a violin signed by all sorts of who’s whos and was nothing but humble, if not one hell of an actress in song.