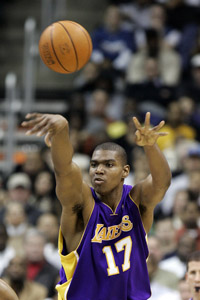 Oct. 28, the NBA will open its doors as the 2008-09 regular season kicks off with a trio of games. As the Boston Celtics look to defend their title, which teams have the best chance of dethroning Kevin Garnett and Co.?

We are the champions!

Boston Celtics: Defending champs will stay on top until someone proves otherwise.

We will rock the champions!

Los Angeles Lakers: A healthy Andrew Bynum will help Kobe Bryant and Pau Gasol with interior defense, but will the Lakers move Lamar Odom before the trading deadline?

New Orleans Hornets: Most promising team in the league: Chris Paul will challenge for league MVP again, and the signing of Posey can only help.

We recently played in finals, too!

Utah Jazz: Big hole at shooting guard keeps them out of top three, but Deron Williams will have them hovering near top.

San Antonio Spurs: The team has won titles in each odd year since 1999. It’s an odd year, and the trio of Tim Duncan, Manu Ginobili and Tony Parker still scary good.

Dallas Mavericks: Can Rick Carlisle put this team over the top? Is Jason Kidd too old to lead? Will Josh Howard stay?

Phoenix Suns: May be the last hurrah for Steve Nash and Shaquille O’Neal. Coach Terry Porter will help bring balance to offense.

Portland Trailblazers: Should round out West playoffs with (healthy) Greg Oden.

Washington Wizards: Resigning Gilbert Arenas and Antawn Jamison was important, but will it pay off?

Atlanta Hawks: Josh Smith might be a locker room cancer. He may be traded by deadline, but not before team’s playoff hopes are ruined.

Denver Nuggets: How long before they ship off Allen Iverson and/or Carmelo Anthony?

They play basketball in June?

Chicago Bulls: Would be ranked higher if they trade Ben Gordon.

They play basketball after October?

Minnesota Timberwolves: How will Kevin Love fit in with Al Jefferson?

Charlotte Bobcats: Team plans to use massive cap space to relocate by 2010.

New Jersey Nets: If Vince Carter isn’t traded, he won’t get much help from Jianlian Yi or rookie Brook Lopez.

Memphis Grizzlies: Even with O.J. Mayo, team is too weak.
New York Knicks: At least New York basketball fans will have the Nets in Brooklyn soon (or not … arena financing delayed).