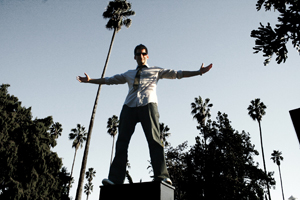 The children are lost deep within the shadows of the night, searching for chocolate and candied treasures throughout Los Angeles. The adults are drunkenly stumbling across the Hollywood backstreets, undoubtedly dressed as the Wal-Mart versions of the Dark Knight and Iron Man. This year, Gary Richards will spend his Halloween night at the most unlikely place: work.

But his scenario isn’t as dreadful as it may sound. As the founder of HARD, the live music production company behind HARD Haunted Mansion, Richards will be in charge of one of the biggest Halloween parties Los Angeles has seen in years.

“Herding 10,000 people, there’s an art to that,” said Richards of hosting the third installment of his hugely popular HARD music festivals. “There are a lot of people that do concerts, festivals, events. There are very few people that can do it and do it efficiently and effectively and still make a business out of it. Anyone can do it, but they can’t do it where they are going to make money and it’s going to run smooth.”

A seasoned veteran throughout the music industry, Richards has seen the ups and downs of the record business.

“I’ve had my own record label for 15 years, and after 2005 and 2006 I’ve just been losing money and putting out great music and no one buying it. Putting out CDs, I think that’s a dead business,” admits Richards.

In response to the slumping music sales, Richards then began to focus on live event production and established what would become his next, and perhaps most successful, venture: HARD.

“I realized people buy [lots of concert] tickets. You can’t get the experience you’re going to get at hard through the Internet,” says Richards.

Still, building the HARD brand was no easy feat, according to Richards. The first HARD event – headlined by Justice, Peaches and 2 Live Crew –launched on New Year’s Eve 2007, a night that marked Richards’ 37th birthday and served as his wake up call into the meticulous world of event production.

“I tried to do too much myself,” reminisces Richards. “There were a lot of problems [logistically] with the event, but it went off and people had the best time. I probably had the worst night of my life. I was running the event single handedly with three or four people. We had no idea what we were doing. To try and do all that on my own, I think I was crazy.”

But through hardships comes experience, as Richards would come to learn and apply to round two: the HARD Summer Music Festival held in July of this year featuring N.E.R.D., MSTRKRFT, Spank Rock and Kid Sister.

“I think that was really where my dream was realized,” says Richards of his second major HARD event. “We went from the New Year’s Eve one, which was kind of ghetto and we just kind of got it off the ground, but at the July event we got to focus on the production. Everybody had such a great experience at the July one that they’re coming back.

“I feel like I’ve done all these things on the live side that it’s all coming to fruition on this show because I’ve got, in my opinion, the best acts at the moment from around the world all descending on L.A. for one night to blow people away with this kind of music. There’s going to be some point during the event where I’m just going to put a mask on and go join the other 10,000 people and just lose it to the music.”