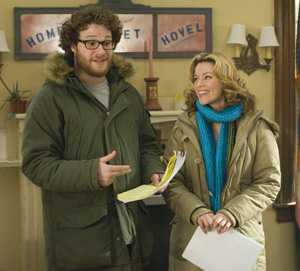 While the initial concept may seem far-reaching, it plays out with disturbing realism in a day where it seems like everyone is flat broke.

Director Kevin Smith, smile on face, notes, “This economic crisis has worked out in my favor; it makes Zack and Miri seem all the more plausible.”

For those uninitiated, Smith can arguably be referred to as the grandfather of modern comedy. The current boom of Judd Apatow-branded films are but the next chapter in the book of comedy that Smith helped write starting back in 1994.

Fourteen years ago, comedy was in a healthy, albeit contrived state, with the slapstick antics of Jim Carrey leading the way with hits like Ace Ventura: Pet Detective. Smith’s ubiquitous debut, Clerks, crept onto the scene relatively unnoticed, and more or less told the future of what we’ve been watching today. It focused on hilarious, fresh dialogue that sounded like it was written by Joe Schmoe instead of Perry the Producer.

Clerks was not a big movie. It was small in every way, from its budget to its admittedly modest production goals. But it launched the career of Smith, who would become essentially the Quentin Tarantino of comedy and remain one of the most renowned cult indie gems that has ever crossed paths with Hollywood.

“I wouldn’t have made Zack and Miri without Seth,” Smith declares. “This script would still be in my desk at home if he hadn’t been onboard.”

Luckily, Rogen proved not only onboard, but was truly ecstatic to be working with Smith. To put things into perspective, that little movie called Superbad, which Rogen and writing partner Evan Goldberg started writing when they were just 13, was directly inspired by the signature dialogue-based style of Smith’s films. Rogen remained a member of the ever enduring Kevin Smith fan club and signed on immediately once he read the screenplay.

“Kevin will get to a set and know exactly what he wants,” Rogen elaborates.

This style has remained his trademark over the years. Rogen knew this and to help him feel more comfortable with the different director and crew, he worked with Smith on acquiring the talents of his friend Banks and Craig Robinson, who appears on the hit show “The Office” and co-starred in this summer’s Pineapple Express.

Rogen worked with Banks on The 40-Year-Old Virgin and knew of her comedic talent.

“I was surprised Kevin hadn’t already had her in mind for the role, she has such a wonderfully dirty sense of humor,” says Rogen.

Banks and Rogen exhibit some true magic on screen, and you never once doubt that these two are meant to be. This alone is an accomplishment. Rogen’s teddy bear image is mighty “cute,” but did anyone actually believe he could end up with Katherine Heigl?

This narrative grey area is thankfully absent in Zack and Miri due to phenomenal performances from both Banks and Rogen, who pull off a pretty neat trick in having their characters really seem in love. The juxtaposition of crude and sweet in this film echoes recent Apatow projects like Forgetting Sarah Marshall, though, once again, Smith’s invisible hand as director makes sure that both spectrums achieve high levels of poignant brilliance.

This is not just a “dude” movie, but really treads on romantic comedy as well. It somehow achieves a pitch perfect blend of boners and breasts.