Obama Vs. MURS FOR PRESIDENT 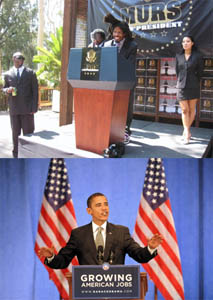 MURS and Barack Obama took time out of their busy touring schedules to answer some questions from their constituents. Who would get your vote?

Obama: Jeff Bridges in The Contender. That was a great movie president. He was charming and essentially an honorable person, but there was a rogue about him. The way he would order sandwiches – he was good at that. (ew.com)

What do you get down to? What’s on your iPod?

Obama: You know I haven’t been buying new music lately. Because I don’t have time. Look, I’m impacted by my generation. Most of my iPod probably is either jazz classics – Coltrane, Miles Davis – or it’s got the songs of my youth, right? So you know Stevie Wonder, Earth Wind & Fire, Aretha Franklin. But every once in a while I will find something that’s out right now that moves me, and then I’ll pull that down. So when the Fugees were together, I loved listening to the Fugees. I think OutKast does a lot of interesting work. My fellow Chicagoan Common I think is outstanding. I really dig his stuff. (vibe.com)

Obama: Casablanca, Godfather I & II, Lawrence of Arabia and One Flew Over the Cuckoo’s Nest (facebook.com)

Obama: “The Arc of the moral universe is long, but it bends towards justice.” —MLK (facebook.com)

MURS: “You can’t soar with eagles when you hang with turkeys.”

Are there regions of the country you feel you need to know more about?

Obama: It’s only been in the last year or year and a half that I’ve traveled at all in the South. The more I travel there, the more I think I’d like to know. Particularly, I think, because the Democrats have made a mistake not going after the South more aggressively, especially in presidential elections. (obama.senate.gov)

MURS: I’m pretty well-versed about the different regions of America thanks to touring.

Of the people you’ve met, who are most intriguing?

MURS: The ones without tattoos. I don’t know what’s wrong with them.
Obama: Meeting Nelson Mandela was a powerful moment. Meeting the Dalai Lama, who was fascinating, just as warm and wise as you’d want the Dalai Lama to be. And Dr. J, Julius Erving. I was a big Dr. J fan as a kid. He called me up about stem cell research. (obama.senate.gov)