Jesse Metcalfe: What would you do if he were the guy on The Other End of the Line? 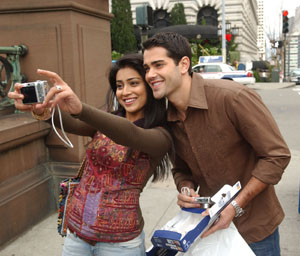 Two strangers connect via the majesty of telecommunications. He’s a successful and dapper New York advertising exec. She’s a charming Indian girl working thousands of miles away at a call center in Mumbai.

He’s involved with a self-important socialite; she, with a man who was picked by her family for an arranged marriage. Yet, the fates (as well as some good ol’ fashioned movie magic) conspire to bring the two together in the romantic comedy The Other End of the Line.

Jesse Metcalfe (John Tucker Must Die) plays Granger Woodruff in the film directed by James Dodson. The production afforded the 29-year-old actor the opportunity to work in exotic India. Culture shocks aside, Metcalfe enjoyed the experience.

“The Indian people are very open and loving,” he says.

As for the onset camaraderie, Metcalfe was happy to have enjoyed a peaceful and harmonious shoot with his co-stars.

“Everyone just got on really well. Everyday was so much fun,” he admits.

Some of that fun included shooting scenes that were, at times, unscripted. Metcalfe recounts the climax of the movie, which calls for his character to fly across the world to win back his ladylove. Granger has to actually snag a taxi outside the airport in Mumbai, which posed a great challenge.

“There’s so much traffic in Mumbai, India, that trying to hail a cab is like a suicide mission,” he jokes.

And while he’s not naming any names, the actor even dishes a little behind the scenes dirt that some of his fellow participants on the film found love – or something like it during production.

As for his future in the romantic comedy genre, fans should prepare to kiss Metcalfe goodbye – at least temporarily. He seems anxious to embrace roles outside the category that has propelled him to success.

He’ll have several chances to do so when he takes to the screen, opposite film legend Michael Douglas in Beyond a Reasonable Doubt. Metcalfe will also appear in the scream-fest The Tortured, which is produced by the folks that created the Saw franchise.

He manages to keep an open mind when it comes to his future in the entertainment biz. Metcalfe is an avid musician. He plays guitar and writes his own songs. He also hints at the possibility of taking a turn behind the camera.

“I went to NYU film school for writing and directing,” he says, adding, “I think creatively I have a lot to give in that area.”

The Other End of the Line releases in select theaters Oct. 31.