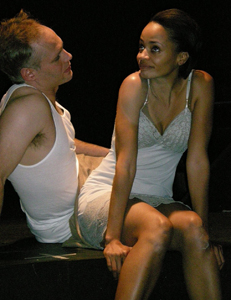 A profound line recited in Stephen Fife’s drama, “Savage World,” is: “We’ve all lost sight of the truth.”

Searching for that very truth and ultimate justice is Sol Eisner (Erik Passoja), a persistent investigative reporter, who believes that champion black boxer Calvin “Savage” James is innocent, wrongly imprisoned for a murder during the Newark race riots of 1967. Eisner’s inquiries proceed, as he interacts with the diverse multi-talented ensemble of 15 (a truly collaborative effort), and further evidence casts doubt on Savage’s innocence.

After the show, Passoja remarked on his two-and-a-half-hour performance, “What an intense role!” A classically trained actor and Yale graduate, Passoja carried the show, displaying a wide range of emotions.

The audience will find itself absorbed in every detail (as if watching “Law & Order” on stage), waiting for the final verdict or surprise twist!