By Thomas Young and Maureen Tobin 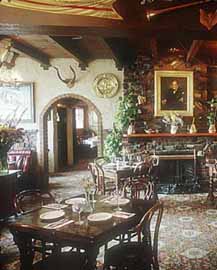 In England, every neighborhood has its own “local,” that’s a pub to us Colonials. In Santa Monica, make Ye Olde King’s Head British Pub and Restaurant, a fixture since 1974, your local.

Yep. English is spoken here. For you novices, that’s not American, but English. But not to worry, old chap, an international crowd calls Ye Olde King’s Head home. For a jolly good time, this is the quintessential British pub and restaurant in Santa Monica, run from its inception by first-rate owners and hosts Phillip and Ruth Elwell. Taking up an entire corner of Santa Monica and 2nd Street, this Old English tradition is always jam-packed. Even in British slang this means chock full, heaving with people. Ask your pals to “Come out for a bevy” (translation: Invite them out for a beer and victuals).

“We always have and always will provide the finest of food, drink and conversation,” assures owner Phil. Recently, Ye Olde King’s Head received “best in town” kudos from the Los Angeles Times.

Let’s do it the English way. Perhaps you’ll begin with the very British Scotch egg, a hardboiled egg wrapped in a delightful ground sausage mixture. Clam chowder is spot on, rich and creamy, the way it’s supposed to be.

Gargantuan fish and chips made with cod from Iceland are a house specialty. Pub Grub? Comin’ right up, mate. Try the bangers, beans and mash – Thomas’ favorite anytime meal. It’s not for the calorie-counting bunch.

Other selections include Steak & Kidney Pie or Shepherd’s Pie, we tried the latter and it was terrific, as was the Cornish Pastie, miners’ food long ago. Enjoy daily specials like the Roast Beef and Leg of Lamb on Sundays. Try the Mixed Grill for a big, multi-choice platter of English tasters.

Folks line up for the popular breakfasts. Phil said he would put his true English breakfast up against anyone’s.

One of the Westside’s loveliest afternoon teas is offered on Saturday afternoons for only $13.95, including all the elegant bits and pieces. Saint Patrick’s Day at Ye Olde King’s Head is an all-day celebration that has been going strong for 30 years – serving up wonderfully made corned beef and hash. All the prices here are amazingly reasonable and you get a lot of bang for the buck.

“What’s for afters?” Right you should ask. Just unfasten your belt a couple notches. We really couldn’t get another mouthful down our gullets. The Sticky Toffee Pudding is for sinners only. When we asked about the recipes their eyes glazed over – a family secret. Wonderful custards, trifles, bread and butter pudding and other guilty pleasures.

Rubbing shoulders amidst the crowd is part of the fun and games, especially in the bar/lounge that’s equipped with traditional dartboards. To top it all off, at the corner is their gift shop, for those times when only genuine English frippery will do. The cheery staff never stops running or smiling. Open daily, pub open till about 1:30 a.m.