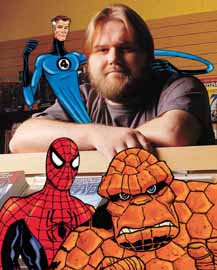 The latest pulse-pounding adventures of Spider-Man, the Hulk, Captain America and the Fantastic Four begin in a cluttered house off Winchester Road in Lexington, Ky.

Kirkman, 26, is a hot property in this small, colorful world. (Fewer than 100,000 people – mostly guys in their 20s and 30s – read most comics, but they’re a passionate bunch.) He has been interviewed on various Web sites, nominated for industry awards and given ovations at comics conventions.

“Man, the conventions are an experience,” said Kirkman, who is tall and stocky, with shaggy, brown hair and a beard. “I don’t want to say I’m like a movie star, but – you know, you’ve got thousands of people there. They want my autograph; they ask me questions about my next project while I’m standing at the urinal.

“Then I come home,” he adds, grinning, “and I’m nobody. It’s great.” “Nobody” might be a stretch. There is a shrine to his work at A+ Comics & Collectibles in Lexington. But Kirkman probably is one of his city’s most unknown celebrities.

As a devoted comics reader and warehouse worker, with no college education, he broke into the business four years ago by publishing his own stuff on the cheap.

He debuted with Battle Pope, the story of a corrupt pope who teams with Jesus H. Christ (yes, that Jesus) to kick butt and take names in a post-apocalyptic world ruled by Satan. His artist was a talented friend from middle school, Tony Moore.

“I was really hoping to offend people with Battle Pope and get some protests going, get some bad press,” Kirkman said. “It’s so hard to break into this industry, particularly at the large companies like DC Comics and Marvel. You have to catch somebody’s eye.”

Alas, the Catholic Church failed to notice Battle Pope, much less sputter with outrage. Each issue sold only a few thousand copies.

Instead, Kirkman came to the attention of cartoonist Erik Larsen, who runs Image Comics, a small publisher that lets creators keep ownership of their characters. Soon, Kirkman was writing outlandish tales about zombies, androids, senior citizen mercenaries and superhero families.

Fax machines and e-mail allowed him to work with artists and editors around the country while staying in Kentucky, where he felt more comfortable.

About a year ago, though, Kirkman’s writing income still was meager enough that he was contemplating a job at Burger King.

“What we liked about Robert was his sense of fun,” said Tom Brevoort, Marvel’s senior editor.

“The movement the last couple of years has been toward these darker and grittier heroes, more realistic, where everyone is wearing black leather with zippers and looking sullen,” Brevoort said. “Robert’s characters actually seem to be having a good time.”

A four-issue gig on Captain America led to a two-year contract. At present, Kirkman writes Marvel Team-Up, featuring Spider-Man and just about everyone else who wears tights, and a Fantastic Four mini-series, which will conclude this summer just as the Fantastic Four blockbuster movie hits theaters.

Marvel pays handsomely, Kirkman said, and it’s a thrill to write about his childhood heroes.

Of course, there’s a trade-off. There are no limits on what Kirkman can do to his own creations. But Marvel would rather he didn’t kill the Human Torch or give Spider-Man a heroin habit. These heroes have been around for four decades, and the typical fan goes apoplectic with rage if anything changes. As does the licensing department.

“You can’t mess with Marvel’s lunch-box business,” Kirkman said. “It’s like writing a sitcom: You can set up whatever problems you want as long as everything is back to normal when you’re done at the end.”

Kirkman said he’s nocturnal at home, writing until just before dawn and sleeping until early afternoon.

He reads nothing but comics – which, as a professional writer, he feels guilty about – and wanders out of the house only infrequently. Most of what he knows about the world comes from the Internet, and in particular the Web message boards popular among comics fans.