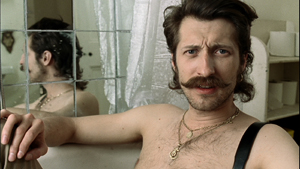 Madonna fans will flock to the theaters in anticipation of her directorial debut, Filth and Wisdom. The story involves three roommates (A.K., Holly and Juliette) who share a London flat, their lives intertwined. Each seeks dreams and passions, while paying dues and working mundane, tedious jobs as a means to an end.

Holly aspires to dance with the royal ballet, yet works as a stripper/pole dancer. Juliette yearns to help children in Africa, but survives as a pharmacist’s assistant and object of lust. A.K. dreams of being a superstar rocker, meanwhile role-playing as a cross dresser.

The film’s narrator, A.K., profoundly states, “Without filth, there is no wisdom – without darkness, no light.”