By Edited by Josh Herman 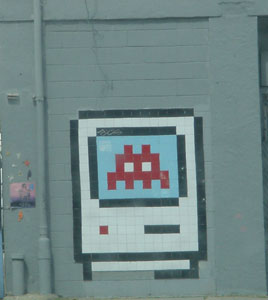 *This is the first in a series of excerpts from the above-mentioned book.

While Paris and London may be better known, El Pueblo de Nuestra Señora la Reina de los Ángeles de Porciúncula (Los Angeles) has some of the most abundant and diverse species from the Urban Artist Family (urbanus artifex). This guide will allow you to identify some of the more prominent members in this fecund graffiti ecosystem.

Life Cycle: A mixture of cement, industrial glue and ceramic tile leads Invaders to outlive their wheat poster cousins. The father often lays his offspring out of reach of predators (urban art enthusiasts), so most escape with merely a missing tile. Eighty to 90 percent of the original population is still intact.

Range: Introduced into the L.A. ecosystem from Paris in the early 1990s, Invaders can now be found throughout the city. Numbers are steadily rising: 134 Invaders currently call Los Angeles home.

During sunrise and sunset, Invaders can often be found on La Brea just north of First Street and at Beverly and Virgil. A map of locations where the species has been spotted is available at space-invaders.com/map_la.html.