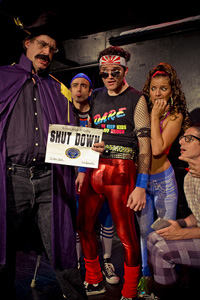 Poking fun at dance movies like You Got Served and Step Up 2: The Streets, “Freak Dance: The Forbidden Dirty Boogaloo” is quite possibly the funniest show you’ll ever see.

The show centers around an ex-championship-winning dancer named Asteroid, who had his genitals rubbed off while doing the Freak Dance too vehemently in a competition that killed his partner, and his dance studio, Fantaseez Dance Center, which is being shut down due to health and safety code violations, such as “the bathroom’s to dark to pee.” His crew of dedicated dancers is hilarious, including a Puerto Rican bombshell who can’t read and an egotistical rocker dude with a sizeable man bunch protruding from his tights, so he looks like a “sausage mule,” as one woman puts it.

Not only does Fantaseez have to put up with a picky health code inspector but their rival dance gang, led by Dazzle, is constantly in their faces, sporting intimidation tactics. Dazzle unintentionally spills that there’s a dance contest and Fantaseez decides to enter in order to win the money they need to pay off their violations. Fantaseez must dance to save their school!

And dance they do … they even go as low as to challenge the Dazzles to a Chicken Dance, where each team pulls out their nastiest, raunchiest tricks. The final dance-off will have you laughing so hard your stomach hurts.