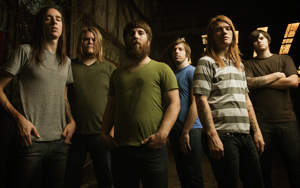 Being a metalcore band has certain expectations that go along with the genre. As their latest work has demonstrated, Underoath are looking to change all that.

“We try not to be in any sort of category, like ‘Oh, you can’t do this because you’re a heavy band,’” vocalist Spencer Chamberlain explains about his band’s recent release, Lost in the Sound of Separation. “There’s songs on the record that are the heaviest things we’ve ever written, and then there’s a song or two that’s like the most mellow thing we’ve ever done.”

This dichotomy, combined with one of the most explosive live shows around, has allowed Underoath to carve out a niche among the heavy music marketplace. Their previous record, Define the Great Line, went gold and saw the band ditch its screamo sound, opting for a more intense and experimental approach instead. Separation, which debuted at No. 8 on the Billboard 200 in September, continues the progression.

“I don’t think the style is a huge jump on this record, but we definitely went way above and beyond in many different levels,” Chamberlain admits. “There’s definitely stuff we wrote on this record we wouldn’t have been able to play two years ago.”

While the group is known for its one-two punch of Chamberlain’s guttural screams set off by Aaron Gillespie’s soaring vocals, its sound encompasses much more than such a simple description. From blasting opener “Breathing in a New Mentality” to instrumental closer “Desolate Earth: The End Is Here,” Underoath paints with a broad sonic palette.

“Eleven songs of just in your face, kind of brutal whatever, doesn’t really make an album,” Chamberlain explains. “In the middle it kind of slows down for a minute. There’s another song that’s like mid-tempo, and then at the end it really chills out and gets super dramatic to that effect of a full story, a full closure. That was the whole goal.”

From the beginning, the band – comprised of Chamberlain, singer/drummer Gillespie, guitarists Tim McTague and James Smith, bassist Grant Brandell and keyboardist Chris Dudley – set out to make an album that demanded to be heard from front to back in a single sitting.

“We don’t want kids to just download their favorite songs. We want people to hear it as one piece,” Chamberlain says. “We raised the bar on all ends of the spectrum – lyrically, vocally, musically, production-wise. We just tried to really write the best music we could write, and I feel like we’ve done that.”

Meanwhile, Separation finds Chamberlain, who co-writes the lyrics with Gillespie, wrestling his inner demons. Coming from a past that includes a battle with drug addiction, he has discovered life’s darkness is never absolute.

“I just write about my own life and what I know best. I’m not making up stories,” he says. “I have a lot of issues and struggles, just like every other human in the world, but I always feel like there’s something else because I do believe in God. So there is going to be that sense of hope in some of the songs.”

Above all, Chamberlain knows firsthand how fortunate he is to have made it this far – something he never takes for granted.

“We’ve all been dreaming about doing this our entire lives, and I’m sure there’s a lot of people who feel the same way that don’t get to do it. So that 30 minutes to an hour and 15 minutes, or however long your set is, if you don’t give it your all then you don’t deserve to be up there.”

Lost in the Sound of Separation is currently available. Underoath will perform Nov. 14 at Ventura Theater and Nov. 15 at Bren Events Center, UC Irvine. For more information, visit underoath777.com.