IAMX: Chris Corner: the Jekyll and Hyde of Music 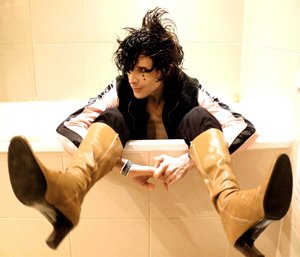 IAMX’s Chris Corner could be a case study for Dr. Jekyll and Mr. Hyde syndrome. Onstage as alter ego X, he is as unpredictable as a ricocheting bullet, a dive-bombing songbird that croons about sex, drugs and politics. Backstage, he’s the quintessential gentleman, soft spoken and articulate.

He graciously shakes my hand and offers some of his wine. I respond that I don’t want to start imbibing early in the day as he collapses casually into an oversized chair.

“I have to pace it throughout the day. It’s like drink, sleep, drink, sleep!” Corner explains.

Add a performance and grueling hours on the road and you have the job description of the touring musician.

“It’s really such a strange energy management [situation], sometimes you just need to get through it, particularly with the jet lag and stuff,” he continues.

IAMX kicked off their tour in Boston in support of not one, but two albums. Previously, finding a label to pick up the then fledgling project in the states (despite Corner’s previous success with Sneaker Pimps) was problematic, but Metropolis Records has at last issued 2004’s Kiss + Swallow and 2006’s The Alternative stateside thanks undoubtedly to MySpace and YouTube buzz. The sudden upswing in support has Corner optimistic.

“I’ve had a little bit of an epiphany about America,” he reveals. “The first night we played in Boston, people were crazy. It was really inspiring. I was weepy to come here and get that kind of reaction. And every night it’s been the same.”

It’s that energy mixed with a desire to have easier access to the places that he wasn’t afforded the time to play on this tour that has lead Corner to court the idea of relocating. No surprise, New York and Los Angeles top the list.

“It would seem like such a cliché, but I don’t care about clichés anymore,” he shrugs.

It wouldn’t be the first time that Corner followed the artistic muse to distant shores. The Yorkshire, England native currently lives in Berlin, a locale that fueled a lot of the material on The Alternative. He hails from a long line of musicians who have flocked to the city over the years.

“It’s the artistic orphanage of the world!” Corner exclaims, adding that it takes care of artists in a spiritual way.

Financially, it also makes sense for a starving artist, just another reason why so many migrate there. But immersing one’s self in Berlin’s artistic melting pot is not without its challenges.

“You have to be a bit weary of getting sucked into to that lethargy. You get lethargic if you don’t have good work ethic. It’s a perfect place to just do nothing. So you do need to keep a little bit of that drive I think, if you [live there.]”

But it’s doubtful that anyone will ever accuse Corner of resting on his laurels. In addition to plotting out the course for the next IAMX album, he’s also mapping out ideas for a membership Web site where he will have greater intimacy with his fans, taking them along with him through the songwriting process as he contributes blogs, posts rough draft mp3s and creates a “home for everybody who wants to be involved in the project.”

Whether or not the next IAMX release will have a chance to be influenced by Corner’s recent infatuation with America remains to be seen.

In fact, the election, he hints, may prove influential in his plans.

“That might be the deciding factor on me relocating for sure,” he exclaims.