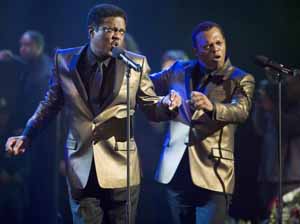 It’s impossible to talk about the new film Soul Men without recognizing with a pang of sadness that it’s one of the last films Bernie Mac completed before his sudden, untimely death in August at the age of 50.

“The first thing I thought was, ‘Damn, Bernie didn’t get to see the movie,” Mac’s co-star Samuel L. Jackson says somberly about learning of his friend’s passing.

But Jackson quickly realized, “If you had to pick a vehicle and say, ‘This is the last movie you ever get to do and the audience will watch this film and it’s the Bernie Mac they knew and loved who came into their homes every week, you’ll be the King of Comedy and sing and dance and have this dramatic arc.’ It’s all the elements of Bernie that we loved. It’s a fitting last performance to remember him by.”

“It was a very tough thing to get through, but we all felt it was probably one of the best performances he’d ever given,” Friendly says.

“Having worked with Bernie,” Castaldi adds, “we got to know him well enough to know he’s sitting up there saying, ‘Well, if I had to go out on something, this is a pretty darn good one to go out on.’”

One of the reasons the film works so well is the relationship between Jackson and Mac, who had been friends offscreen for more than 15 years. “Bernie and Sam had such mutual respect and affection for each other,” Friendly remembers. “They were having a great time together. It wasn’t forced. It wasn’t phony.”

The pair’s rapport was not, however, born from any similarity onset. In fact, their acting styles couldn’t have been more different.

“Sam is method guy, totally prepared, does not veer,” says Friendly. “And Bernie would try a hundred different versions of a line. That’s the difference in their two approaches.”

“I know Bernie goes off the page,” Jackson says, speaking about Mac in present tense as many of the people involved in the film still do, seemingly unable to admit he’s really gone, “and I know that we have to give certain amounts of information to an audience. So, during rehearsal, if I can say to Bernie, ‘OK, when you get through doing that, just let me know you’re done so I can do my line. Wink at me, do something,’ because I know we have to let [the audience] know we have to do this or go there. And a lot of times they just didn’t say cut and I knew to shut up and let Bernie do what Bernie was gonna do.”

For Adam Herschman (Accepted, I Now Pronounce You Chuck & Larry), working with Jackson and Mac was a dream come true.

“I called it BMF Bootcamp,” Herschman says. “Bad Mother F***er Bootcamp. You’ve reached Hollywood when Sam Jackson calls you ‘motherf***er’. I don’t need a star on the Hollywood Walk of Fame, I just need [that].”

Being a relative newcomer had moments of undeniable pressure for Herschman.

“The first time I met Sam and Bernie was on set,” he says, still sounding overwhelmed. “[I] was thinking, ‘I don’t want to mess up and I don’t want to make anyone mad and I want to be funny.’ Bernie was extremely supportive,” Herschman remembers warmly. “Off camera when we would work together, he’d look at me like, ‘Come on, kid, you can do this. Come on, make me laugh.’ I was in shock when I heard he’d passed away.”

For Jackson, he will always treasure the experience of making Soul Men with his dear friend.

“Seeing him every day was just part of the blessing of doing this film,” Jackson says. “Every morning it was like, ‘Bernie here? Cool.’”