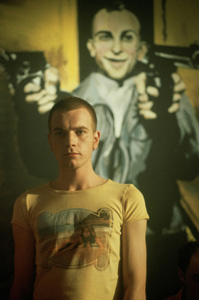 Choose life. Choose a job. Choose a career. Choose a big television. Choose to watch a Trainspotting/Shallow Grave Ewan MacGregor-filled double feature presented by director Danny Boyle at the Egyptian Theatre tomorrow night. If the anticlimax of election fever has you wanting to be in another country doing a ton of hard drugs, then save yourself the interventions and watch other people make the wrong decisions for you at American Cinematheque’s rehashing of Boyle’s directorial debut and its oddly-intertwined older brother for a night filled with heroin-induced stupors, possibly intentional drug overdoses, dismembered murder victims and more untaxed income than anyone knows what to do with.

Aesthetically, Boyle’s films are not for the faint of heart (think babies dying of neglect and bloody fights with kitchen knives), but underneath the relentless drug abuse and murders-by-hammer, lie a dry, black humor that only Boyle’s signature directing style can contain.

With all the voting behind us and a new presidential inauguration not far off, we deserve to detox from the red, white and blues with some Scottish-directorial methadone. And the reasons? There are no reasons. Who needs reasons when you have four straight hours of pre-Phantom Menace Ewan MacGregor? 7:30 p.m.