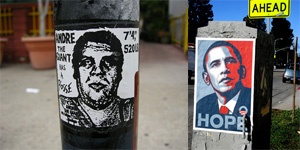 *This is the second in a multi-part series presenting excerpts from the above-mentioned Field Guide.

Description: Faireys typically display a color palate of red, white and black on politically charged wheat posters, stickers and stenciled graffiti. Species can be identified from the unique markings of the word “Obey” and/or Andre the Giant’s face in a star.

Life Cycle: Varies. Fairey may ‘bomb’ 100 wheat posters during a few months with no more than 10 surviving to adulthood (a month after they go up).

Call: “Even though the street’s dominated by advertisers who have money, I’m a taxpayer and have the right to a voice. I should be able to express myself, legal or not.”

Range: Fairey was accidentally introduced to Los Angeles, carried into the city on the underside of a skateboard from the Rhode Island School of Design. His stickers and wheat posters soon proliferated. While feral species roam the streets, Faireys can be domesticated, as evidenced outside the La Brea eatery Cobras & Matadors and the Obama campaign.