The Boy In Striped Pajamas: Lines May Divide, But Hope Unites 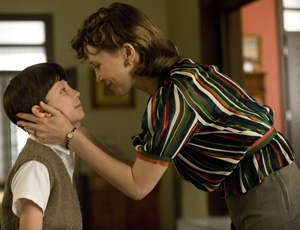 Keeping with the popular trend of “book to movie” (i.e. The Secret Life of Bees, What Just Happened), comes a lesser-known historical novel, The Boy in the Striped Pajamas. Already receiving acclaim and accolades throughout Europe, it’s a sensitive, touching, powerful work, as seen from the perspective of two nine-year-old boys, living amidst the horrors of Auschwitz.

The film opens with a narrator’s voice, “Childhood is measured by sights and sounds before the dark age of reason grows,” setting the tone for this profound story about the effects of prejudice, hatred and violence on innocent people, as perceived through the wide eyed wonder and curiosity of Bruno, son of a Nazi commandant, who befriends a Jewish boy imprisoned in a concentration camp.

John Boyne, author of the award-winning novel, was inspired by Primo Levi and a lifelong interest in the Holocaust; trying to find answers, struggling to understand it better. His starting point was an image of two boys sitting on two sides of a fence, inspiring the film’s tagline: “Lines may divide us, but hope will unite us.”

Bruno (played by talented newcomer, Asa Butterfield), suddenly uprooted from his home and safety net, meets Shmuel (played by Jack Scanlon, making his feature film debut with a natural dignity about him), also taken away from his community, and the two unite, at a terribly dark place in history. The boys’ fates and paths cross as they form a forbidden friendship, seeming doomed from the start.

Director Mark Herman knew immediately as he read the book that he could adapt it visually to screen, yet found it challenging to make such an important film. He’s thankful for the already strong word of mouth abroad. The cast includes some of the most versatile British and American actors that found themselves constantly researching the period in order to be authentic and credible.

David Thewlis (Harry Potter) as Bruno’s father, the Nazi Commandant, did research throughout filming to perfect his role. Although he found it draining to read Rudolph Hoess’ memoir, The Commandant of Auschwitz, and watch graphic footage of Night and Fog (often resulting in nightmares of his own daughter being taken away), this insight and exposure helped him portray his character as not “a total monster, but also a family man, loving father and husband, yet devoted to his political party and high office, following orders, doing his duty, without any remorse.”

One scene shows Thewlis playing chess with his son at night, and the next day ordering masses of innocent people to be killed in the crematorium. Thewlis found it constantly challenging to humanize a stereotypical, evil Nazi, and searched within the darkness of his own self to make his character more real.

Vera Farmiga (mother, Ilsa) is an astonishing, incredible actress (The Departed), convincingly playing the loving mother and dutiful wife living less than a mile from the compound yet unaware of the atrocities being committed, as was true of many Nazi officers’ wives. The children (Bruno, Shmuel and Gretel) are the heart and soul of the piece, brilliantly cast for their essence and capacity for light, despite the darkness surrounding them.

The book closes with, “of course all this happened a long time ago, and could not happen again, not in this day and age.” Unfortunately, this story is timeless. With all the current conflicts in Rwanda, Somalia, Israel and Darfur, it’s as relevant today and will resonate and touch viewers worldwide.

The Boy in the Striped Pajamas releases in select theaters Nov. 7.