Repo! The Genetic Opera: Not Your Parents' Opera 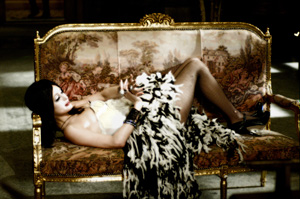 Repo! The Genetic Opera tells the story of an epidemic of organ failures, where organ transplants are financed by GeneCo, a company that sends out murderous Repo Men to reclaim body parts from patients who miss payments.

“It was a five-year battle to make this,” continues Bousman, who essentially bartered his success in helming three Saw sequels to see this passion project come to life. “The idea to do something different was invigorating.”

Being different can be a curse in Hollywood, where new ideas are eschewed in favor of familiar formulas. The talents behind Repo! hope being different is a blessing.

Repo! was created by Terrance Zdunich and Darren Smith and looks like it might become heir apparent to The Rocky Horror Picture Show. Cast and crew recently attended a screening of that cult classic to do some word-of-mouth marketing.

“We beseeched the Rocky Horror people,” says Bill Moseley, one of the film’s lead actors. “Please, come see our movie.”

Repo! opens in eight theaters and without a big budget marketing campaign, so this film needs all the support it can get.

“Fans have taken it upon themselves to market the movie,” says Bousman. “The hope is … we show everyone there’s an audience for this.”

The Repo! co-creator even sees a link to the popularity of recent comic book adaptations.

“Superhero movies are operatic archetypes,” he says. “Our dream is that it latches on.”

“People are experiencing it the way we want them to,” says Smith, co-creator and composer. “In the theater, people are clapping and singing along.”

“So many movies are the same thing,” laments actress Paris Hilton, “it’s an experience.”

Nivek Ogre, a musician best known as the frontman to Skinny Puppy, thinks that the film’s dense music tableau is a blessing.

“It requires repeated viewings,” says Ogre. “It appeals to my counterculture audience.”

“I think she’s incredible,” says Hilton, “an icon. Nobody could have played Blind Mag like she did.”

But don’t just take an heiress’s opinion, go see the movie and find out for yourself.