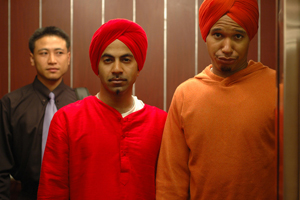 What do a Bhangra rapper, a blue-eyed Jew and “Saddam Hussein” have in common? The first-ever Desi Idol, of course.

Presented by Mr. Single, the (pork) Loin King and owner of Loins of Punjab, the Desi Idol is a three-day singing contest that takes place in New Jersey for the Desi (South Asian) community in New York and New Jersey. After becoming acquainted with their hopes and dreams and of course, their families, the contestants prepare to perform their best imitation of famous Bollywood songs and compete for a cash prize.

As foreshadowed by contestant Sania Rehman (Seema Rahmani), Loins of Punjab Presents, written, produced and directed by Manish Acharya, is a complete Bollywood-style movie packed with action, romance and comedy. Acharya, who also stars in the movie, has even included the type of singing and dancing scenes one would expect from Bollywood.

Shabana Azmi, Ajay Naidu, Jameel Khan, Ishitta Sharma and Michael Raimondi star in the movie. The film also features Shantanu Mukherjee, a well-known Indian singer, as one of the presenters.