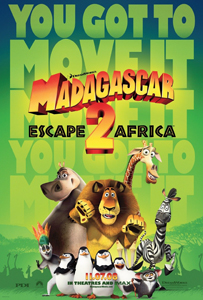 With a star-studded cast which includes the voices of Ben Stiller, Sacha Baron Cohen and the late Bernie Mac, Madagascar: Escape 2 Africa is a comic wonderland. The film picks up where its predecessor left off with each of the principle characters attempting to leave the land that they’ve been stranded on.

While amusing in some places, the sequel to the animated blockbuster Madagascar is not without its faults. It’s a bit hard to get into the story if you haven’t seen the first one.

The humor at times is also strictly for the kids. But with lovable characters like these, it’s fairly easy to forgive and forget.