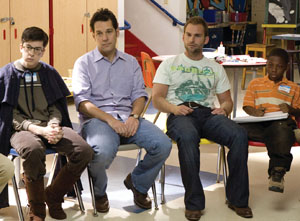 When a film has a “smell my finger” joke in the first 60 seconds, you kind of know what you’re in for. In the case of Role Models, written by and starring Paul Rudd and directed by David Wain (Wet Hot American Summer), it’s hilarious vulgarity, unruly humor and penis jokes. That may sound easy and cheap, but this isn’t American Pie 7, despite the fact it co-stars Seann William Scott who so famously played Stifler.

Rudd and Scott star as Danny and Wheeler, best friends and co-workers who peddle energy drinks to elementary school kids to deter them from using drugs. After one exceptionally bad day on an energy drink bender, they end up arrested and facing a choice: hard time in prison or 150 hours of court mandated community service at a youth center as mentors for “Dungeons & Dragons”-style dork Augie (Christopher Mintz-Plasse) and angry, foul-mouthed Ronnie (Bobb’e J. Thompson).

Following the Judd Apatow model of creating cheer-worthy characters (including a brilliant turn by Apatow’s Superbad discovery Mintz-Plasse who might as well legally change his name to McLovin), moments of surprisingly heartfelt vulnerability and a posse of lovable losers rising up against the odds, Role Models is a film to look up to.