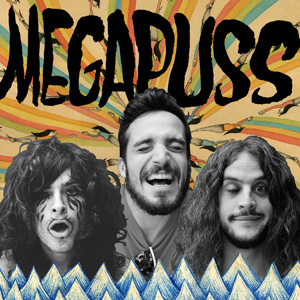 If voting for Obama is your first priority on Election Day, then buying the new Megapuss record should be the second. That’s right. Megapuss.

Greg Rogove, one half of the ambiguously perverted new project that he and Devendra Banhart concocted in between Banhart’s Smokey Rolls Down Thunder Mountain Tour, explains that he once thought it meant “big kiss” in Swedish. Fortunately, he was wrong (it’s actually massa puss) – but that hardly means there’s anything wrong with being Megapuss.

On the happy contrary, Megapuss is a cheeky and decidedly fun new musical collaboration between the two bearded bards, who are releasing their debut album, Surfing, Nov. 4. Just don’t call it a side project.

“Both of us don’t really like that term, you know,” he remarks. “Nothing should be like a side project. It’s its own thing – it’s the Megapuss project!”

Needless to say, both Rogove and Banhart have their own respective gigs in life: Rogove as a member of New York-based mystic rockers Priestbird and Banhart as … well, Devendra Banhart.

For the past year and a half, though, Rogove has been the drummer for Banhart’s esteemed touring posse. The idea for Megapuss was stitched together during this time through whimsical reverse engineering – first as a name, then with song titles and finally, through the addition of music and lyrics.

“We’d be driving through Europe or be in Omaha, Neb. and feel sad and lonely,” recalls Rogove. “But, we’d need to play a show and get in the zone to play music. So what are we gonna do? Let’s write a song.”

In the brief minutes they had before going onstage, the two would compare funny stories, generate “hit” song titles like “Dr. Beaver Mustard” or “Chicken Titz” and record sketches of the results. Once the tour was over, they had an arsenal of a dozen fully formed songs.

Back in Los Angeles, they recorded Surfing in the basement of an authentic L.A. shack off the 5 Freeway. Rogove strongly feels that living in Los Angeles. and their close proximity to the ocean influenced the record’s summery mood, as well as its title.

“What’s better than surfing?” he asks. “Not even the literal meaning … but the action of surfing, conceptually. The gracefulness amongst the great powers of nature and the universe – and you’re just cruising along with it. That’s the inspiration.”

“Sayulita” and “Surfing,” the lengthiest tracks on the record, bear Rogove’s indelible mark, complete with cosmic chords and melancholic melodies. Meanwhile, “Crop Circle Jerk” sounds like it could easily have been part of Banhart’s last album. Nevertheless, it all fits together just right.

Prominent tributes to Wham in “Adam & Steve” and Bo Diddley in “A Rose on His Hip, Gun on His Chest,” divulge moments of outward silliness – but there are subtle reflections inside each song, such as the cruelty of homophobia or Diddley’s death earlier this year. Even “Hamman” is a secret ode to Amma, the hugging saint from India.

Bashful fans may want to pick up the iTunes version of the album because the phallic imagery is unrestrained on the album art. Of course, Rogove and Banhart’s admirers will appreciated their well-endowed man parts proudly gracing the back cover; but even this mischievous display carries meaning.

“We wanted to create a balance with the name,” ponders Rogove, “but it was also about being comfortable and being at ease with oneself – all of oneself.”

With yin-yang aspirations and the addition of Fab Moretti of the Strokes to their lineup, Megapuss is set to make a roaring entrance onto the scene like a giant … kitty. Meow.

Surfing is currently available on iTunes and will be available in stores Nov. 4. For more information, visit myspace.com/megapuss.