PRESIDENT-ELECT BARACK OBAMA: What to Expect of Our New Leader 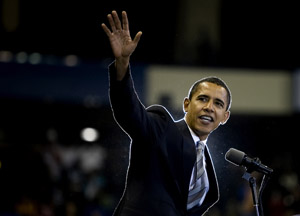 First, the cheering. Did you take a picture of your ballot? I did, because it’s one for the ages.

Politics is so often a field devoid of absolutes – everyone has their own ferociously held opinion; successes and failures melt into tone-conscious shades of gray; history has that nasty habit of being written and re-written by whoever happens to own the printing presses at the moment – but this day stands forever as a singular moment in our history.

Forty-four years ago, African Americans didn’t have full voting rights. Sixty years ago, black soldiers could not fight alongside their white compatriots. A hundred and fifty years ago, this country still had slaves. Four years ago, it was impossible to elect a competent president.

The economy will continue to deteriorate; vicious terrorism will again rear its ugly head, Americans will lose their jobs and retirement savings and we won’t have George W. Bush to kick around anymore. Worst of all, after running a campaign that has managed expectations spectacularly – never setting the bar too high, always delivering on manageable goals – President Obama’s first year will see the Democrats in control of Congress and the White House with astronomical demands weighing heavy on any decisions.

With strong majorities in the House and Senate, Obama will wield a powerful legislative pen. He will face the most difficult test of any presidency: what to do when you have power.

It’s easy for presidents to dig in for battle against a hostile Congress, easy to play the blame game and wheedle for public pity points. It’s much harder to govern with a mandate from the people.

Let us not forget our history. Democrats have simultaneously held the White House and Congress for only six of the past 40 years.

In the post-Watergate deluge of 1976, Jimmy Carter went from Plains, Ga. to 1600 Pennsylvania Avenue with a dominant Democratic legislature, only to see his presidency and the majority swept away a mere four years later.

In 1993, Bill Clinton saw a friendly Congress buck his plans for healthcare reform and then fall to Newt Gingrich’s Contract with America in 1994.

The greatest challenge for Obama in his first year, armed with plenty of votes and an overwhelming national appetite for change, is how far is too far, and how far is far enough. One has to look all the way back to Lyndon Johnson’s Great Society, begun in earnest in 1965, to find dramatic and widely supported progressive legislation – Medicare, Medicaid, the National Endowment for the Arts, the Corporation for Public Broadcasting, federal funding for education – that has retained lasting relevance in the conservative final third of the American century.

President Obama would do well to balance the personas of the past three Democratic presidents, each of whom faced their own triumphs and failures of character and judgment. Obama has long been likened to Carter in his political philosophy, combining an egalitarian optimism and a broad worldview with a message of change, but he must be careful to avoid the high-minded moralism that scuttled Carter’s effectiveness as a leader.

Obama would be far better served to appropriate the ruthless political mind of LBJ, whose persuasive skills in a progressive Congress were only derailed by the cataclysmic drain of money, manpower and spirit of the Vietnam War that LBJ’s stubbornness refused to concede. In place of that stubbornness should fit Clinton’s profound emotional radar, politically capable of shimmying around Beltway landmines and personally magnetic, bursting with that uncanny Bubba-ish “I know your pain” empathy. Clinton’s undisciplined hubris and vengeful spirit, naturally, can be left at the door.

So what should we expect and demand from an Obama administration? If nothing else: accountability and level-headedness.

So many hours of Obama’s day will be, by necessity, dedicated to cleaning up the messes of the past eight years. He finds himself in the Oval Office at the bottom of a well, inheriting a collapsing national infrastructure and burned global bridges but benefiting from one singular advantage. If he insists upon a governmental personality that admits its mistakes and operates in a competent and tolerant manner, his administration will immediately maintain better footing in the country and around the world.

During his marathon campaign, Obama faced down the remarkably resilient Hillary Clinton and a buzzsaw GOP attack-machine in its nastiest form. He proved himself a cool customer in the heat of battle, determined but not dogmatic in pursuit of policies that refuse to bend to theocratic binaries –good/evil, right/wrong, patriotic/unpatriotic – and eschewed partisan polarization.

Obama’s “professorial” air, so often criticized by his opponents and pundits, is the very stuff Washington has lacked for the past eight years: intellectual discourse, honest and professional debate and a willingness to entertain the alternative. While Obama’s administration walks into a litany of major policy disasters, it also inherits a vacuum of modern leadership. The restoration of faith in the ideal that those who lead our country are the most capable of leading it should be his first, last and most enduring mark on the office during his first term.

On matters of policy, Obama must move forcefully but slowly. He will benefit from a friendly Congress and the initial goodwill of the American people, but he must not squander his political capital on fights he cannot soundly win. The Democratic Party, for much of the latter half of our century, has been the Loyal Opposition, proposing initiatives that ideologically outdistance their pragmatism. To prove his efficacy as a leader, working to fulfill his mantra of change and upholding the progressive banner, Obama must choose his initiatives wisely.

First on his agenda must be the tempered oversight of the economy and a firm regulatory hand, particularly with regard to curbing predatory lending practices, halting the parade of foreclosures and putting a sturdy bottom under housing prices. Now is the ideal moment for Democrats to prove that they can inject the power of the government into the free market without fundamentally altering the capitalistic go-getter spirit.

John McCain and the GOP Congress were hit hardest in this election on the bailout package that delivered the ultimate conservative Catch-22: taxing the people, controlling the market and publicly coming to the defense of the rich to save policies that have proven utterly disastrous for the middle class. This is a serious, long-reaching stumble for the trickle-down theory of wealth distribution, and Obama would do well to ride out the recession by focusing on home values, assuring taxpayers of accountability for the bailout package, creating new jobs in federally-funded interior works projects and regulating without scapegoating the ultra-wealthy.

Health care must be the second priority of an Obama administration. Obama’s plan takes some of the best intentions from Hillary Clinton’s signature cause and implements them in a staggered approach.

During his first term he must pass and support his clarion call for universal mandatory coverage for children. His management of federal health care as an addition to, not replacement of, private or employer insurance programs to further competition, cover existing medical conditions and import safe and cheap drugs from abroad must be handled carefully as a first step to introduce Americans to flexible and personable government-run health care. He must de-mystify the influence and opportunities of his National Health Insurance Exchange and public health insurance options to ensure that his administration does not become synonymous with Big Government while reminding citizens of the essential failures of the existing health care catastrophe.

His last immediate priority must be an effort to restore America’s standing in the world, beginning with an immediate, phased withdrawal of troops from Iraq. During his campaign, Obama made much hay out of his plan to redistribute troops to Afghanistan to fight the “real” enemy, the Taliban, and this option provides some red meat for the war hawks in the country while narrowing our military focus to the densest concentration of culpable Islamic extremists in the world.

Obama must convince the international community, including our Chinese and Russian partners on the U.N. Security Council, that we are indeed at war with terrorism, not with Islam, not with the Middle East and not against an Axis of Evil. We must sit down with leaders of “rogue nations” as we must sit down and talk with the leaders of all nations to diffuse the prospect of perpetual religious warfare on a global scale.

A great many issues will doubtless be left out in the cold. Educational reform, gay rights, immigration and aspects of alternative energy will all likely find themselves on the sidelines, at least initially.

It is critical that Obama’s supporters, particularly his army of first-time, younger voters, appreciate that Obama will have his share of failures. He will be forced to table some of his best initiatives, amend some of his campaign promises and marginalize the needs of those who need his help the most. If his presidency is to be what he has promised, he will have to gamble on the hope that in four or eight years he will do as much as he can, laying a new foundation with worn-out tools.

That, perhaps, strikes most at the heart of possibility in the Age of Obama. Americans time and again have shown their willingness to believe, to trust in optimistic leadership and have faith that 300 million little steps make a great leap forward.

For all of the clichés that abound, for all of the political rhetoric tugging on the heartstrings of voters, for all of the rabid divisiveness that still sickens our democracy, this election means something. If only to shout through history to our children, echoing a faint call from the mountaintop, we mark the moment when the impossible was, for at least one day, forever possible.