Translating Hollywood: From the Posteritati Gallery Collection (Mark Batty): Posters for the People: Art of the WPA (Quirk) 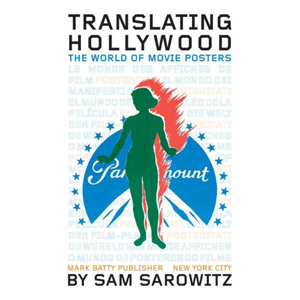 Students of graphic design, art lovers, film geeks and history buffs all have reason to rejoice with the recent release of two books celebrating the art of the poster.

Sam Sarowitz’s Translating Hollywood is both an astute examination of the cultural and creative differences inherent in worldwide motion picture promotion and a deliriously exuberant collection of eye-candy. Spanning over five decades and including posters for films from directors like Hitchcock, Truffaut, Tarantino and the Coen Brothers, to name just a few, the book juxtaposes the original, sometimes staid U.S. version of film posters with their often more colorful and imaginative foreign counterparts. With posters from England, France, Italy, Poland and Japan, it’s a visually stunning and intellectually stimulating cinematic world tour.

Ennis Carter’s Posters for the People: Art of the WPA is, on the other hand, a strictly American affair and sticks to a very specific time period. From 1935 to 1943 the Works Projects Administration, created by President Franklin D. Roosevelt as part of his New Deal, employed hundreds of artists to design posters for its wide range of social programs. Divided into sections such as Health & Safety, Prosperity & Opportunity and Knowledge & Information, the book is chock-full of gorgeous reproductions of these posters and serves as both a beautiful coffee table conversation piece and an invaluable art history lesson that takes us from the depths of the Great Depression up through the early years of World War II.

Both of these fine volumes illustrate how indispensable and effective the poster has always been and will likely continue to be as a tool for advertising and propaganda. Also, they’re both really pretty. Grades: A/A+

Translating Hollywood and Posters for the People are both currently available.