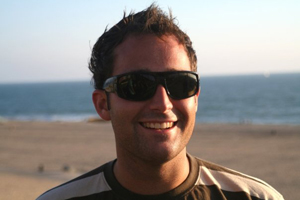 As far as I’m concerned, there are two types of people in this world: beer drinkers and everyone else. Now, cocktails and wine are cool, but I am neither an alcoholic nor am I a woman.

Beer is the kind of alpha-male concoction that puts hair on your chest and gives you a buzz in the process. Save the wine for Bridge Night with grandma and/or Italian food outings.

And thus, I give you the ultimate beer drinker’s utopia, the Daily Pint, located right off the 10 freeway in Santa Monica. This little dive bar screams beer from the top of its lungs, complete with many, many draft beers and a chest of bottled beer with names so foreign it will make your tongue sore just trying to pronounce ’em.

Upon ordering a delicious Stone IPA, from San Diego’s fantastic Stone Brewery, the Irish tongued bartender denied me and handed me a draft beer from an unpronounceable tap.

This mystery IPA (Indian Pale Ale) was damn good, and the fact that it was as foreign as it was only compounds the applause I must bestow on the Daily Pint. Quite simply, it is impossible not to love this place if you have an appreciation for beer. They have no less than 30 beers on draft and a mind-blowing selection of bottles.

Unfortunately, with all the beer emphasis, the food has been neglected and, as such, the Daily Pint is sans kitchen and all the requisite bar food that comes with it. However, and this could be almost superior to bar food, drinkers are encouraged to bring in their own food. So screw the pumpkin patch and have your next picnic in a dive bar.

The ambiance is dark, and more than a bit East Coast. There is a massive, and I mean MASSIVE, projector screen that should be quite epic for Sunday games. Shuffleboard and pool tables are there for those feeling a little competitive.

The Daily Pint is a beer drinker’s bar in a city of pretentious martinis and expensive cocktails. You can catch a buzz off of only a few beers, considering many have alcoholic levels akin to a two-buck chuck bottle of wine. Bring your boys, drink some beer and be merry.

To submit a bar for consideration, e-mail bars@campuscircle.net.