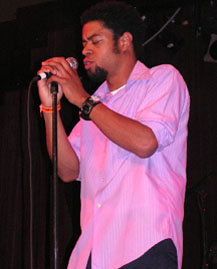 When I was 16, most of my time outside of school was spent skateboarding and going to rocksteady/traditional ska shows. These shows featured local bands such as Hepcat, Unsteady, Yeska, Ocean 11 and a band by the name of See Spot. The same friendly circle of people and family members were in attendance to have a good time and do what everyone does at these type of shows – skank. Sadly, with the influx of newer, so-called Third Wave ska bands, the music slowly faded from the Hollywood scene and a few of the bands broke up.

A series of sold out Hepcat reunion shows in the past three years stirred up some buzz that maybe people in Los Angeles were ready to return to the old routine. Goldenvoice decided to test the pulse with the organization of Ska Bonanza, featuring old-school bands The Allentons, The Aggrolites, Joey Altruda’s Classic Riddims and the newly reunited See Spot.

The El Rey looked like a scene out of the reggae Jamaican scene circa the 1960s. Wall-to-wall stood rudeboys, skinheads and rudegirls donning their best dresses and bright red lipstick, ready to twist the night away.

Kicking off the night were 11-year veterans The Allentons. Though the band’s lineup has changed a few times, most recently with the addition of drummer and pro skateboarder Rudy Johnson, their uplifting horn section and infectious sing-along spirit has thankfully remained the same.

Next to rock the house were "dirty reggae" rockers The Aggrolites. Their name pays homage to ska and reggae kings the Aggrovators and The Crystalites, respectively.

Yet another reunion took place when See Spot performed. By this time, everyone was well into skanking and chanting for the Los Angeles boys to grace the stage. Alex Desert of Hepcat fame introduced the boys and See Spot popped out with the same energy and musical precision of so many years before. They covered many songs off 1996’s Is There Any Love in Your Ska?, including "No, Not Me."

When it came time for See Spot to make way for Joey Altruda, everyone cheered loudly and screamed "Encore, encore!" Responding to the crowd, See Spot came out and played "Cancion de Amor," a staple at their early ’90s shows. The band recently released a collection of songs from 1996 to 2003 called Who Got It?

Joey Altruda’s Classic Riddims finished off the memorable night with his unmatchable blend of jazz, reggae and rock-infused music. Be sure to pick up 1997’s Kingston Cocktail for your next party!