Quantum of Solace: Blonde Bond finishes what he started. 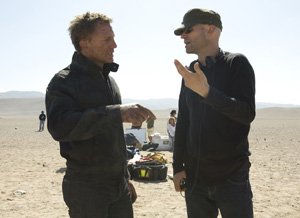 Bond. James Bond. With one name you can almost hear the sound of panties dropping and guns being drawn. The Bond series is the most successful franchise in film history, and the 22nd installment, Quantum of Solace, starring Daniel Craig, the once reviled, now revered Blonde Bond, picks up just one hour after Casino Royale left off, making Solace the first direct sequel in Bond history.

“What interested me was the last five minutes of Casino Royale,” says director Marc Forster (Monster’s Ball), “where this character left off, the emotional state and that he just lost the love of his life. I wanted to dig into his pain more.”

“It just seemed to me, and we all agreed, that at the end of Casino Royale it was the beginning of the story as opposed to the end of a story,” says star Daniel Craig. “He’d fallen in love and had his heart broken, this organization they’d discovered they’d just started peeling back the onion skins of. To do another movie and just say, ‘Oh, there was this chick once’ seemed to be the wrong thing to do.”

However, following in Royale footsteps proved to be treacherous.

“I didn’t realize the intensity and the media attention would be so enormous,” Forster admits breathlessly. “It’s interesting for me to do a film like this, which is five times the budget I’ve ever had before. You’re working with five times the money but 100 times the pressure. Casino Royale was the most successful Bond ever, box office-wise, but it was also a critical success. To follow up on that, expectations were extremely high, and I definitely felt that.”

“The whole collaborative effort of making a movie like this is a big deal,” Craig explains. “It’s a really, really big deal. There were 1,000 people who worked on this movie. At any one time I’m working with 200 or 300 people. We shot this for six months [and] on the last day the AD says, ‘Ladies and gentlemen, that’s a wrap’ and everyone looks around at each other and says, ‘We’ve done something here’ because it was a huge journey. These movies are fantastic, an amazing experience to shoot, and I think it’s on the screen.”

Producers Michael Wilson and Barbara Broccoli are quick to praise Forster for the film’s success.

Part of Forster’s brutal attack strategy was to create the shortest Bond ever. Solace clocks in at a taut 100 minutes.

“Marc is unsentimental as a director,” Broccoli reveals. “He’s not an egotist about his own material. He felt this was a perfect length.”

“He didn’t cut anything out,” Wilson interjects, “he just compressed it.”

“I wanted the film to feel like a bullet that keeps you on the edge of the seat until the end,” Forster explains. “I always thought the pacing should be pretty tight but ultimately, it’s all about character and it’s all about Bond. If I can’t connect with the character emotionally, the movie doesn’t work. All the action, everything else, will not be successful if that doesn’t work.”

Digging deep for an emotionally raw Bond was just a small increment of the demands placed on Craig.

“Daniel wanted to do stunts where I was like, ‘Are you sure you want to do that?’ and I’m sitting there on the edge of my seat thinking, ‘OK, I hope this goes well.’ He really pushes [himself],” Forster says with great esteem.

Craig mirrors Forster’s appreciation for their collaboration in a reinterpretation of one of cinema’s greatest icons.

“It’s classically Bond,” Craig says with a devilishly debonair smile. “We’re just fucking around with it, and it’s enjoyable to do that.”