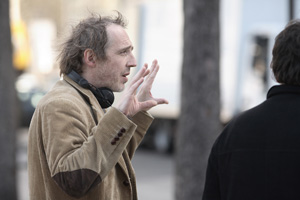 If one is not yet familiar with the work of French director Arnaud Desplechin, his upcoming release, A Christmas Tale, displays his tremendous wit and knack for ensemble narratives. A Christmas Tale, starring the elegant Catherine Deneuve as the Vuillard family matriarch, Junon, is a bittersweet holiday story filled with love, sibling rivalry, long simmering family resentments and ultimately, lasting connections.

Desplechin himself was hoping for a heartbreaking tearjerker dealing with a serious subject matter (Junon’s life threatening illness reuniting the family), yet chose to bring in levity for a balance.

The extraordinarily charming supporting cast of characters range from Henri (Mathieu Amalric, Quantum of Solace), an alcoholic, neurotic son (willing to be a bone marrow donor for his mother) and his sexy girlfriend (Emmanuelle Devos); another troubled adolescent, Paul, and his melancholic playwright mother, Elizabeth. Desplechin, with his shrewd ability to mix dark comedy with psychological anguish, is a “French Woody Allen” of his day.

What inspired him most to make this film was his dream of a “French Thanksgiving/Christmas-themed film,” but how American audiences would respond was a mystery to him.

He wished to include vivid images of his beloved home, Paris, City of Lights, and achieves this with exquisite cinematography.

Arnaud states, “Just as the plot is dark and threatening, there is a distinct contrast – showing the city blanketed with snow, white, full of love, magic and hope.”

The film is filled with such contradictions in its entirety: fear and joy, darkness and light, tragedy and comedy, and the cast members jump from one emotion to another, almost unpredictably.

The director describes his work as a “constant roller coaster of extreme emotions, making the film larger and more dimensional,” so that the viewer can involve all of one’s senses.

He was inspired early on by Jean Renoir’s film, The Rules of the Game, as well as the American great Alfred Hitchcock’s film, Vertigo. Desplechin believes that infusing dark subject matter with something lighter “interests people more than just watching a heavy soap opera.” He compares his work to Dickens’ novels, involving many characters and multiple sub-plots, in hopes that viewers will find something that resonates from their own family/childhood traditions.

His utmost goal is that the combined elements of tragedy, humor and romance will uplift one’s spirit. He really likes the word bittersweet, and hopes that this taste will linger with the viewer at film’s end.

In A Christmas Tale’s final scene, Junon and her son, Henri, play a coin game of heads or tails.

Desplechin explains this as symbolic of playing “the game of life, and how to accept the card/coins we are dealt with, even if it’s life and death decisions ... it’s a heavy game, but still a game!”

This beautiful film demonstrates how full of life the esteemed director truly is, and his ability to create onscreen characters with powerful energy and emotional depth. He follows France’s brilliants in the film industry, including Jean Luc Godard and François Truffaut, and has become a leading light in his own right.