The Dreaming: Aware of the Past, Aiming for the Future 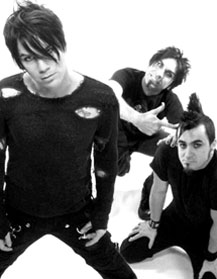 Let’s go back in time for a moment. Flash back to the ’90s when industrial rock bands were more plentiful than boys in eyeliner are today. On the forefront of this movement was a band that would become a cult icon of their day, led by a man with one very big voice.

Like the dinosaurs and hair metal, though, industrial rock had its rise and its fall, with only a handful of hangers-on.

"Most guys don’t get a second chance," says former Stabbing Westward frontman Chris Hall. That’s why, with his new band The Dreaming, he’ll be taking it by force.

"It’s actually more magical now," says Hall on starting over from the bottom up and forming The Dreaming’s identity. "We’re still in a ‘creating ourselves’ mode. It’s in a cool state of evolution and I hope it stays like that," he says.

Finding themselves alongside Hall are drummer Johnny Haro and guitarist Diego Russo. And if you happened to see The Dreaming play recently, you might have seen a certain girl-bassist from another disbanded industrial group, who Hall colorfully describes as looking like a "Viking warrior princess" when she performs. Let your imagination fill in the gaps.

"You can tell there’s a lot of experience," says Hall of his bandmates. But on that same token, Hall has had the uphill task of staying out of the shadow of his past work.

"A lot of people try to compare us [to Stabbing Westward], but you can’t really."

He firmly believes that this new formula of band members has its own unique chemistry.

"A band is the sum of its components and the energy they create together. Even if I wanted to sound like Stabbing Westward with these guys, I couldn’t. It’s just not how they play," he says.

Though there is no mistaking Hall’s signature vocal style, The Dreaming is hardly just the industrial band his voice could so easily lend itself to. That would just be way too obvious for them. The band brings in a little bit of everything, from metal to goth to punk to screamo, safety pinning its members together like one of Trent Reznor’s strategically ripped shirts.

"I listen to the radio and I really don’t hear a lot that sounds like us," says Hall, though he adds, "which is good in some ways but bad in others. You kind of want to fit into a niche."

Hall’s thoughtful, metaphor-heavy lyrical prose is also something of a rarity in modern rock.

"There’s a lot of music out there that isn’t very word-friendly, like least common denominator," he says, "so I try and find colorful words." The final test his lyrics have to pass, he says with a laugh, is being able to affirmatively answer the question, "Could William Shatner read these words out loud as a poem and have them stand on their own?"

Though The Dreaming is keeping busy writing and performing in search of a record deal, Hall and his band aren’t in it to pursue fame and fortune, but more for their own personal gratification through expression. But to be fair, Hall does think it’s pretty cool that their song "Beautiful" is featured on the Elektra soundtrack without them actually having any label or deal yet.

"I went to Best Buy and bought it," Hall retells with a laugh. "You can purchase something with a bar code that says The Dreaming on it. So we’re validated in some tiny, tiny way."