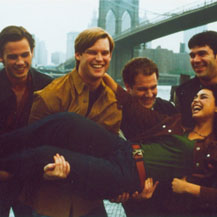 When the gates of the ivory tower part and college graduates stumble blindly into the brutal, take-no-prisoners world of real life, the moment is ripe for drama. After Daniel Kay left the safe confines of the campus for the gaping maw of New York, his experiences as a struggling artist, the camaraderie with friends he met along the way, and his passion for self-expression found voice in Way Off Broadway, his feature film debut.

Kay describes the autobiographical nature of his film, which intertwines the stories of five college friends after graduation, who fight to survive in their respective artistic careers in New York.

"The movie is very autobiographical in the sense that it came out of my experiences trying to make it as a writer and director in film in New York. I had a lot of friends that I graduated from college with who were also trying to do similar things," he explains. "We were all sort of big shots in college, like these characters are, and then we got out in the world and it was a slap in the face."

To bring the story of this circle of friends to the screen, Kay notes the trials and tribulations facing a first-time filmmaker.

"From start to finish – if you want to call this the finish – it’s like eight years," he says. "I shopped it around for about three or four years, I was working in New York on movie sets, meeting a lot of producers and directors, and gave my script to anyone who would listen to me."

Once given the green light, Kay says that the casting became the most critical element of the film.

"I knew that the movie was going to live or die by the cast. It wouldn’t matter how good the script was, or the direction was, or the cinematography was if the cast didn’t work." Kay notes that while the casting process on independent films typically take two weeks, he insisted on an intensive six-month marathon to ensure the most effective ensemble.

Among Kay’s ensemble is Morena Baccarin (Joss Whedon’s short-lived "Firefly"), who approached her character of Rebecca, the struggling actress who has just broken up with her boyfriend, with a personal knowledge of her given situation. Fresh out of the acting program at Julliard, Baccarin felt she could empathize with Rebecca’s hardships in the professional world.

The role "was really identifiable," she says, because "I understand this character [and] I had just broken up with somebody too." Most of Rebecca’s scenes where she waited at auditions or talked to casting directors were easy, Baccarin says, because "I’ve had those experiences, so I was just doing what I normally do."

For Forbes March, he says that living the life of an actor helps him identify with the struggle of all artists including that of his character, the guitar-playing Jay. Artists, he says, sacrifice everything for their passions.

"That’s why artists are such common fodder for dramatic stories," explains March. "It’s really heightened reality – everybody has dreams and goals that they want, but only artists’ goals and dreams are so important to them [that they] really are trying to live [their] dreams," March explains.

March also notes that he was able to channel some of his own actor frustrations as well as his often-tumultuous emotions into his character.

Even in this chaotic and frequently disheartening life of an artist, Kay says he finds some hope and inspiration.

"Whether the movie [is] unsuccessful or not, I will never have that regret. This is always what I wanted to do, since I was a kid," he says.

Ultimately, Kay notes, perseverance and determination remain the most important attributes of the artist.

"When I was really struggling for three, four years, when it didn’t look like I was ever going to get this movie made, there were many times I thought about quitting. It was funny [and] ironic, because that’s what my script is about."

He adds, "I’ll always know that I really did give it my all. I followed my heart and my passion to do what I wanted to do whether it worked out or not."