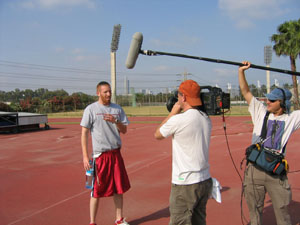 How did Jews affect basketball, or better yet, how did basketball change Judaism?

The year was 1946; the game, the opening game of the Basketball Association of America (or BAA which is the predecessor of the NBA) between the New York Knickerbockers and Toronto Huskies. Oscar B. “Ossie” Schectman, a Jew of European background, managed to score the opening basket and with his teammates, Sonny Hertzberg, Stan Stutz, Ralph Kaplowitz, Jake Weber, Leo “Ace” Gotlieb and Hank Rosenstein, went on to make basketball history.

Inspired by Ossie Schectman’s “first basket,” David Vyorst’ documentary attempts to set the record straight and change Hollywood’s notion of Jews and sports. Hollywood’s characters, like Mort Goldman of “Family Guy,” have portrayed Jews as weak brainiacs who are not cut out for sports. However, Vyorst argues that, despite a somewhat popular belief and Hollywood’s tales, sports and athleticism have been ever-present in the Jewish culture, even dating back to Jacob’s time.

Following a brief history of Jewish immigration to the United States and its causes, The First Basket, narrated by Peter Riegert, sets to examine the first Jewish basketball players. Through cultural examination and personal interviews, Vyorst attempts to find out why a sport like basketball became so important and popular among Jews.

What is amazing about this documentary is the mastery by which it is composed. The viewers are delighted by black and white pictures and scenes of old Jewish neighborhoods from the late 19th and early 20th centuries: the small apartments on Lower East Side New York; little street vendors selling Manischewitz matza and rugelach; rabbis walking to the local synagogues; men and women busy at work trying to make a living and taking care of their families; kids running around in their shorts, playing basketball. And then it cuts to the present: a colorful Migdal Ohr Institute’s basketball game and Rabbi Grossman, with his long beard and black hat, sitting on the sideline and observing his team’s progress.