Pray the Devil Back to Hell: (Balcony Releasing) 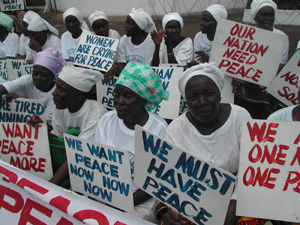 Most documentary films we’ve become used to nowadays offer more questions than answers and often leave us with a negative or unsatisfying view of the world. Whether unlocking the secrets of dysfunctional healthcare systems or breaking down scientific jargon associated with global climate change, today’s documentaries are big on informing, but do little to inspire.

In contrast, Abigail E. Disney and Gini Reticker offer a wonderful look at the power ordinary people can have to affect positive change in the world. Pray the Devil Back to Hellis the intriguing account of a group of brave and truly visionary women who demanded peace for their home country of Liberia, during the decades-old civil war, which concluded in 2003. Through personal interviews, archival images and scenes from present-day Liberia, the narrative of this group of women conveys their courage and determination as they battle against rebel warlords, army sergeants and heads of state. In one scene, the women barricade themselves at the site of stalled peace talks they helped start in Ghana and announced they would not move until a deal was reached. Faced with intense pressure from the stubborn male diplomats and a state of emergency situation back in their native Liberia, the women threatened to remove their clothes if their demands were not met. What ensued was a humorous account of just how far these women would go to see peace in their homeland.

Their demonstrations produced the eventual exile of then-dictator Charles Taylor (a reputed abuser of human rights), forced the disarmament of both rebel factions and rogue military soldiers and paved the way for the election of Ellen Johnson Sirleaf, Africa’s first female head of state in 2006.

Pray the Devil Back to Hell goes against the political norms we are used to today. This film exemplifies that we are all indeed important in any political process. The film encapsulates how any of us can affect change, despite being poor, disillusioned or oppressed. The women in this documentary prove to us how powerful we can be if we uphold our beliefs and convictions under the weight of any obstacle. Grade: A

Pray the Devil Back to Hell releases in select theaters Nov. 14.