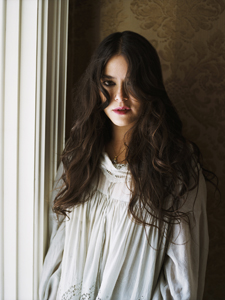 After a long, hard road, Rachael Yamagata has definitely hit the spot with her new record, broken into two parts, Elephants… Teeth Sinking Into Heart. Growing up near Washington, D.C., Rachael started her musical career playing in a band, and her songwriting skills began to be noticed and passed along.

“I loved playing in the band, and then it happened so suddenly,” she says. “Took me by surprise, but I loved the songwriting part of it.”

Rachael had only played one solo show before she started showcasing for labels and now her second album is out and certainly is a must-listen.

She has already launched her fall headlining tour for the new album that began Sept. 20. The new CD is very different from her previous album, Happenstance.

The two CDs have 15 tracks all together. Multi-instrumentalist Mike Mogis (Bright Eyes) produced 12 of the tracks, and the two others (“What If I Leave” and “Horizon”) were produced by John Alagia, who also produced Happenstance.

Yamagata wrote the lyrics for these songs during her two-year touring cycle and the time she spent after in her home in Woodstock, N.Y.

Her inspiration came from “human behavior challenges,” she says. “The walls we put up and how we tear them down and the sociology of interaction fascinates me.”

The majority of her songwriting comes from her personal relationships, as well as the people around her.

With regards to touring she says, “I have a love-hate relationship with ever stepping on a stage.”

She loves to travel and is comfortable with the nomadic lifestyle, though. She loves all the best classic writers from the ’70s on a broad spectrum, including everything from the Beach Boys to Barbara Streisand, the Beatles and Led Zeppelin. She studied theater in school and hopes to possibly revisit acting one day. But, she feels that she got a lucky break being able to do what she loves and write songs.

“The songwriting part of it got me,” she assures.

The live performance aspect and writing songs inspired her to become a musician. She recalls seeing a live performance of a band in high school that blew her away and from then on songwriting became her thing.

Currently, she resides in Philadelphia when she’s not on tour, but she has moved around a lot throughout her busy, exciting life. She still sees her family and friends a lot when she travels from city to city on tour and claims “frequency is definitely better.”

When asked what it feels like to have come so far in the music industry, Yamagata says, “The highs are extremely high and the lows are extremely low … it’s amazing but very unglamorous. But I get amazing opportunities, especially playing with people you’ve always looked up to.”

Yamagata has collaborated with noteworthy musicians such as Jason Mraz and Ray LaMontagne, but one of her favorite people she recently got to work with was Bruce Springsteen.

“I was totally fascinated. He was so easy and great to work with,” she says. Though she enjoys life on the road, she could see herself just recording records and not touring someday.

Stay tuned because we can definitely expect many more great things from Rachael Yamagata.