Head Like A Kite: Haven’t heard of this band? Where have YOU been? 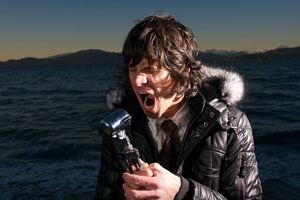 First came the electroclash theatrics of artists like Fischerspooner and Peaches. Now the gauntlet has been passed to a new brand of dance music.

Head Like a Kite utilizes cinematic imagery in its live shows to accompany a bold musical style (evident on its latest release, There is Loud Laughter Everywhere) that draws upon such influences as Gary Numan, Brian Eno and Kraftwerk.

The mastermind behind this assortment of sound is Seattle-based Dave Einmo. Einmo carefully builds upon each Head Like a Kite track in the same way that a music producer or a DJ would put his or her stamp on a project.

“I start out with some sort of drum loop with drums that I play and record myself,” explains Einmo.

From there, he adds various instrumentation and samples that ultimately get recreated onstage with his band. Head Like a Kite is fast becoming as much of an international sensation as it has across the states.

Aside from recent appearances on MTV2, Einmo and company have also played venues as far as Japan. Yet, unlike American audiences, attendees at the shows in Shibuya absorbed its performance with an astounding sense of reverence.

“They just take the music so seriously,” muses Einmo. “They treat it like theater or a movie.”

Einmo also has a shortlist of great venues stateside that he loves playing. Among them is Los Angeles’ Cinespace and Doug Fir Lounge in Portland.

“The motif of it is sort of like a David Lynch log cabin, underground. But on the inside, it’s also pretty high-tech,” he explains.

As for what to expect should you suddenly find yourself compelled to attend a Head Like a Kite performance when the band rolls into your town, that’s easy: “The shows have become much more like the second album – much more like a party.”

Head Like a Kite will perform Nov. 18 at Cinespace. For more information, visit headlikeakite.com.