The Upside of Anger: (New Line) 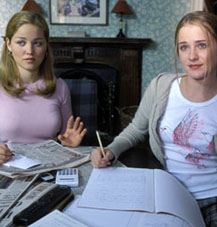 With its uncommon story of a middle-aged woman’s comic tragedy of depression after abandonment by her husband and featuring uncommon performances from Joan Allen and Kevin Costner, The Upside of Anger culminates in remarkably excellent results. p> Allen plays Terry Ellen Wolfmeyer, a 50-ish suburban housewife whose husband suddenly leaves his family behind on a romantic tryst to Sweden with his secretary. Ashamed and utterly directionless, Terry either neglects her four grown daughters Hadley (Alicia Witt), Emily (Keri Russell), Andy (Erika Christensen) and Popeye (Evan Rachel Wood), or scolds them without reason as her anger slowly envelops every facet of her life.

Enter Denny Davies (Costner), a retired Detroit baseball player whose drinking, pot-smoking and laissez-faire attitude provide the perfect salve for Terry’s wounds. Slowly, Denny becomes a surrogate father and husband to the family as the women collectively attempt to repair their broken home.

Allen and Costner deliver superb performances, as Allen alternates her characteristically sound dramatic work with moments of delightful comedy. Allen channels her motherly instincts so well into her role that specific glances and inflections are so spot-on that they produce groans of "just like my mom …" in the audience.

Costner, again walking his well-worn path of playing baseball players, departs from any semblance of his previous incarnations and gives a hilarious and inventive turn as Denny. Working with subtle grace and humility, Costner lets Allen shine and admirably supports the younger actors of the Wolfmeyer family. Denny breathes fresh air into Costner’s career.

Fashioning his film halfway in between a studio picture and an independent production, director, writer and co-star Mike Binder brings great depth and meaningful gravity to the domestic sphere, manipulating his actors’ performances and the nuances of his script with precision and competent artistry. The film’s overly long running time and invasive voiceovers by Popeye as she attempts to provide a circular moral to the story are the film’s only drawbacks.

The Upside of Anger creates an atmosphere so real and so palpably uncomfortable that it demands and receives rapt attention from the audience. Rare are these authentic cinematic moments that allow us grudgingly to remember our own past mistakes and laugh at the familial trials we all face.

The Upside of Anger is currently in theaters.