The Henry Clay People: For Cheap or for Free
(Autumn Tone) 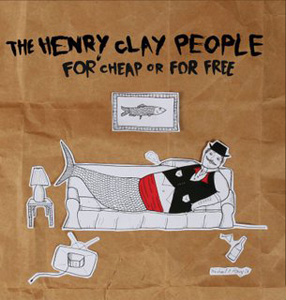 This third full-length combines a perfect formula of sad bastard luck and drunken cheer, every song an anthem, yet heavily divided in tone by its separate recording sessions. Several songs carry over from the Working Part Time EP, released earlier this year and far more representative of the band’s rowdy live show than For Cheap on the whole.

That said, those three – as well as “Fine Print,” which references earlier song “Elly and the Eczema Princess” and is also from that original recording session – balance the more polished recordings, the cynicism over how predictable the kids are, the acoustic breakup ballad, the barking of Siara’s dog.

Rather than point to Joey Siara’s lyrics, increasingly about the reality of living as a part-time musician with favors to ask and debts to pay, or the influence that stems here from ’70s glam (“Living in Debt”), mid-’80s alt-rock (“This Ain’t a Scene”) and, on the whole, that ambiguous field of Americana/alt-country, it’s easiest to sum up For Cheap or for Free by mentioning how doomed the Henry Clay People are to garner a share of reviews that claim “Rock and Roll Has[n’t] Lost its Teeth.”

For Cheap or for Free is currently available.