Johnny Foreigner: Waited Up Til It Was Light 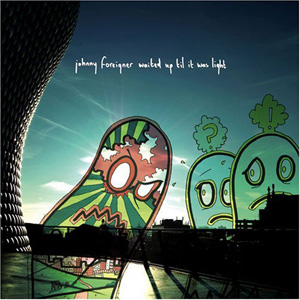 “Lea Room” is an analogy about how it is so obvious that some relationships aren’t working, and in this case, the couple about to break up is a performer on stage and his audience. The singer frantically attempts salvage, but in the end, gives up with the advisement to “get off before the ship goes down.” Things may fall apart in the song’s storyline, but the song itself is a dizzying success filled with contagious urgency. And that’s the Johnny Foreigner modus operandi.

You can forget trying to figure out the quirks, especially when songs carry telling titles like “Our Bipolar Friends.” Just enjoy the mad rush – two guys and a girl, mostly male vocals with occasional female lead, having as much fun and making as much noise as a five-piece.

Waited Up Til It Was Light is currently available.